The pilot is to be blamed, says aviation expert

One of those findings, Henry reported, was that the pilot of flight 331 insisted
on landing on runway 12, instead of using runway 30 that was suggested by Jamaican
air traffic controllers concerned about the heavy tailwind.

Other facts unearthed by investigators in the 15-day-old investigations are:

In addition, Henry said the flight plan listed Grand Cayman as the alternative
airport, and that the aircraft had enough fuel to make the trip.

Slack, who looked over all the findings released yesterday, said it was clear that
the pilot made one bad decision after another, starting when he shrugged off local
air traffic controllers and insisted on using runway 12.

"He had an opportunity to do something safer and he passed on it ... he was gambling
with the lives of these people," said Slack, who is also a pilot.

Speaking to The Gleaner from Texas, the former NASA engineer said the pilot
had a second opportunity to correct the first mistake by "turning around and going
to Cayman", as was indicated in the flight plan.

Click on the image below for animation on the runway mishap 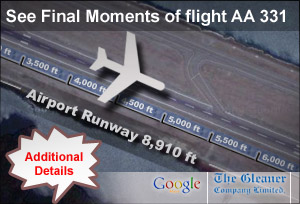