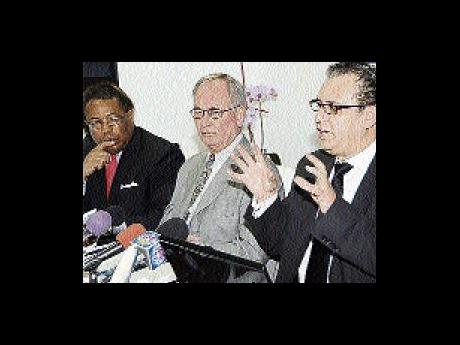 Manuel von Ribbeck (right) addresses the media during a press conference at Spanish Court Hotel in St Andrew yesterday. Looking on is another attorney-at-law, Anthony Hylton (left), and Max Vermij from Accident Cause Analysis in Canada. - Norman Grindley/Chief Photographer

A team of local and international lawyers has started the battle for compensation for the passengers of the American Airlines aircraft which overshot the runway at the Norman Manley International Airport last month.

In the first step in what could be a lengthy battle, the law firms of HyltonBrown of Jamaica and Ribbeck Law Charted of Chicago, United States, yesterday filed a petition for discovery against the aircraft manufacturer, Boeing.

The petition was filed in Chicago on behalf of 12 of the passengers and requests that the court orders Boeing to release information on the aircraft, the recommended training for the flight crew and other data.

"We want to determine who is liable for the accident and who should compensate our clients," attorney-at-law Manuel von Ribbeck told journalists in Kingston yesterday.

Mr von Ribbeck said Boeing had been named as the potential first defendant but other entities, including American Airlines, could also be sued to get compensation on behalf of the passengers.

"It could take months or it could take years," von Ribbeck said when questioned about the timeline for any compensation package.

He said despite the initial report on Wednesday that investigators had found no evidence of mechanical problems causing the crash, this would not prevent the lawyers from targeting Boeing or any other party in the quest for compensation for the passengers.

According to von Ribbeck, the legal team has retained a private aviation expert to conduct an independent investigation.

Canadian aviation expert Max Vermij will lead the efforts of the legal team to determine who should be held liable.

"Max will take the investigation from a point of view that is a little bit different from what you are seeing. He represents the interest of the victims as opposed to the members of the official investigation who are primarily representatives of the airline or the manufacturer of the aircraft.

"In that sense now, we have someone who will oversee things on behalf of the families," added von Ribbeck.

In the meantime, local attorney Anthony Hylton of HyltonBrown said the legal team had written to American Airlines requesting that the luggage of the passengers be released quicker than the 60 days which had been announced.

"We have made demands on American Airlines to meet with us to discuss a more acceptable time frame in which the passengers can receive their luggage and personal items," Hylton said at the media briefing.

Hylton had initially expressed concern about an offer of US$5,000 which American Airlines had put on the table in the way of compensation to passengers for the delay in handing over their luggage.

But he told journalists yesterday that having seen some of the letters sent to the passengers by the airline, he is now convinced that they would not be signing away any of their rights if they accept the money offered.