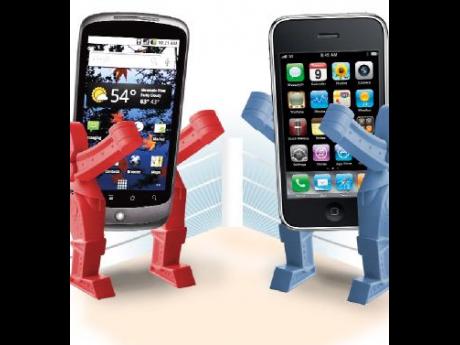 Google Nexus One phone and an Apple Iphone getting ready to punch it out in a boxing ring.

The once-cuddly relationship between Google Inc and Apple Inc is morphing into a prickly power struggle as the ambitions and ideas of the technology trendsetters increasingly collide.

The growing use of high-powered phones for Web surfing has become a flash point in the brewing battle because both Google and Apple view the mobile market as a key to their continued success in the next decade.

The rivalry also is spilling into other products, including Web browsers, computer operating systems and digital music.

The tensions rose further Tuesday when Google unveiled its plans to sell its own cellphone in its latest bid to upstage Apple's hottest gadget, the iPhone.

Google is billing its phone, called the Nexus One, as a "super" phone - a device designed for people looking for something more advanced than the iPhone, Research in Motion Limited's BlackBerry and other devices that serve as pocket-sized computers.

The Nexus One "is the closest thing to an iPhone challenger that I have seen so far", said Gartner Inc analyst Ken Dulaney. "It's a very good piece of hardware."

Meanwhile, Apple is taking a stab at Google's heart by expanding into advertising sales. Apple let it be known that it had bought a mobile advertising service, Quattro Wireless, just before Google held a news conference at its Mountain View, California, headquarters to announce the Nexus One.

Quattro gives Apple its own platform for distributing ads on the iPhone, and conceivably could serve as a marketing vehicle for a computing tablet that Apple is expected to be introducing near the end of the month.

The acquisition also serves as a counterpunch to Google's proposed US$750 million acquisition of Quattro rival AdMob, a deal that may be tied up in a regulatory review for several more months.

Apple didn't disclose Quattro's sales price, but the technology blog All Things Digital pegged it at US$275 million.

Google hopes AdMob can help it become as dominant selling ads for mobile phones as it has been in placing ads on Internet-connected computer screens during the past six years. Most of Google's ads are tied to search requests on personal computers, a system that has propelled Google's annual revenue from US$1.5 billion in 2003 to more than US$22 billion in 2009.

Meanwhile, the iPhone has turned into a gold mine for Apple, with more than 30 million of the handsets sold in the past two and a half years and demand still growing. It has helped boost Apple's annual revenue from US$24 billion in its fiscal year 2007 to US$36.5 billion in its most recent year ending last September 26.

The iPhone's success also has spawned the development of more than 100,000 applications that make it easier to play games, read news, check the weather, get directions and shop on the handset.

Google acknowledges it also has benefited from the additional traffic that the iPhone has brought to its search engine and other services.

But the revenue that Google gets from the iPhone may diminish as the array of applications that consumers put on their handsets decrease the need to use search engines to find popular services, Broadpoint.AmTech analyst Benjamin Schachter said in a recent research note.

By designing and selling its own phone, Google will have another way to ensure its services remain within easy reach of people on the go.

Besides their technical prowess, Google and Apple are packing plenty of financial artillery.

They are Silicon Valley's two most prized companies, with each of their market values hovering near US$200 billion. In another reflection of their power and influence, neither Google nor Apple is joining the high-tech herd at the consumer electronics show in Las Vegas this week. They don't have to because the media flocks to them whenever they want to show off a new product.

A looming showdown between Google and Apple seemed improbable just a few years ago when they had a common disdain - and fear - of software maker Microsoft Corp.