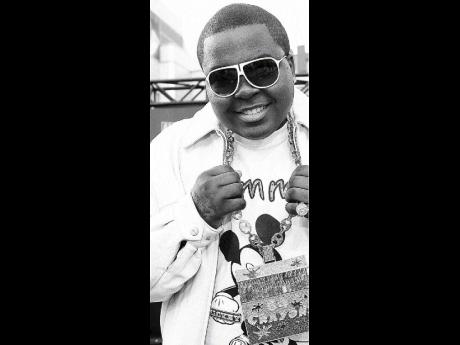 International hitmaker Sean Kingston, at only 19 years old, is a busy man. Months after the release of his sophomore album Tomorrow, the youngster is already moving on to his next, launching his own label and has his hands in a number of other ventures.

Rising to stardom in 1997 with his hit song Beautiful Girls, the Jamaican-American singer, like one of his latest hits, Fire Burning, is setting a scorching pace in the music business.

In September of 2009, the youngster released Tomorrow, a more mature and vocally fine-tuned musical effort. When The Sunday Gleaner spoke to the singer prior to his scheduled performance at 'Coca Cola Zero Presents: Sean Kingston in Concert' set for Saturday, January 16 at the New Kingston Golf Academy, he was just returning to the United States from Puerto Rico and was already gearing up to go back into the studio.

According to Kingston, in a time of musical hardship with declining record sales, he has managing to stay afloat and his sophomore album is doing as expected. He said, "I grew up a lot for this album, it's like vocally my voice sounds better, my songs are put together better. I've been doing this for four years, so I'm getting different creative ideas and that's why the album is called Tomorrow, 'cause it's not just music for today but music that can be played 10 years from now."

On the album, Kingston works alongside other hitmakers such as Haitian Wycleff Jean, Akon, Good Charlotte, Lil' Wayne, producers Red One, Timbaland and others. The second release from the album, Face Drop, Kingston said, has also been doing well. To promote the album, the singer has been touring non-stop in the United States, Canada, Puerto Rico and other locations.

Despite the hectic schedule, Kingston has not been kicking up his heels and taking a break. Instead, he has been working on his third yet-to-be-named album. "The second album was massive but I lost a lot of my elements, which got caught up with the label. So the third album will be seeing a bit of everything - urban, pop, going back to the drawing board," he said.

One of the tracks he hopes will be on the third album is a collaboration with Stephen Marley called I'm Confused. He also hopes to have a collaboration with singjay Mavado on it and recently released a song with Sean Paul called Follow Me. On the Caribbean side, he also hopes to work with Bajan singer Rihanna. Also on the plate for the star is writing for other artistes including the hit, Watcha Say, for Jason Derulo. He will also be heading into the studio soon to work with Ciara, among other artistes.

Acting in the future?

While this seems like a lot for one man to handle, Kingston also has plans to move into acting in the future, and there are plans in the making to ink a deal with Disney. He also has his own label, 'Time is Money Entertainment' where he has signed R&B-reggae singer Iyaz, who hails from the Virgins Islands, and has a debut single called Replay. Also in the works is his own clothing line and a shoe line called 'Yums', which is expected for April.

Before all his future projects come into play, local fans can expect to see Kingston next weekend, his third appearance in Jamaica. More recently, Kingston performed at Margaritaville in Montego Bay, which he said was an energetic crowd. He said fans can expect even more from him. He told The Sunday Gleaner: "I'm bringing my own band. Last time I was there I performed on tracks, so this will be another vibe that the band brings out. It's gonna be huge."