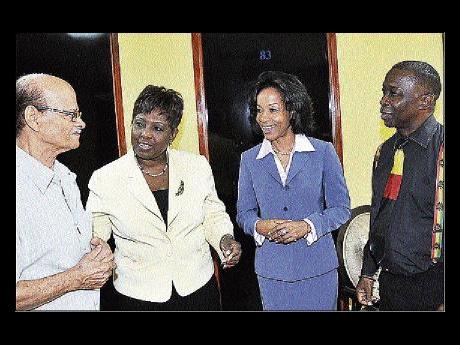 In this November 2009 file photo Minister of Youth, Sports and Culture Olivia Grange (second left) hears from then Chairman of the Jamaica Cultural Development Commission (JCDC), Hugh Nash (left). Looking on are: Executive Director of the JCDC, Grace Silvera (third left), and Director of Culture in the Ministry of Youth, Sports and Culture, Sydney Bartley. The entire JCDC board resigned recently. - file

THE ENTIRE board of the Jamaica Cultural Development Commission (JCDC) has resigned with immediate effect.

The Sunday Gleaner was informed yesterday that the members of the Hugh Nash-led board tendered their resignations last Wednesday in what is being described as part of a major restructuring now taking place.

But an internal memo indicating that Nash's name should be removed from all JCDC communication with immediate effect has led to questions about the reason for the resignations.

"The board members offered their resignations and they were accepted as part of planned structural changes now taking place," Oliver Watt, director of communications at the Ministry of Youth, Sports and Culture, told The Sunday Gleaner yesterday as he downplayed the issue.

Watt said a new board is to be named shortly and Culture Minister Olivia 'Babsy' Grange could take the recommended members to Cabinet as early as tomorrow.

Watt pointed to the January 1 appointment of Grace Silvera as executive director of the JCDC as the catalyst for the restructuring.

Silvera, the international marketing director at Red Stripe, has been seconded to the JCDC for a year to "help build and preserve the country's highly treasured culture in the further enhancement of Brand Jamaica".

Since that appointment was announced, the JCDC has decided that the contracts of two senior officers, director of human resources Sharon Dunkley, and marketing expert Dahlia Harris, would not be renewed.

This has been followed by the resignation of the board and gives Silvera a blank slate to fashion a new-look JCDC without Nash looking over her shoulder.

Nash was the second executive director of the JCDC - then the Jamaica Festival Commission - serving from 1964-1967.

A treasure book of knowledge, Nash has led the JCDC's mandate to "develop and promote the creative talents and cultural expressions of the Jamaican people".

Efforts to contact Silvera and Nash yesterday were unsuccessful.