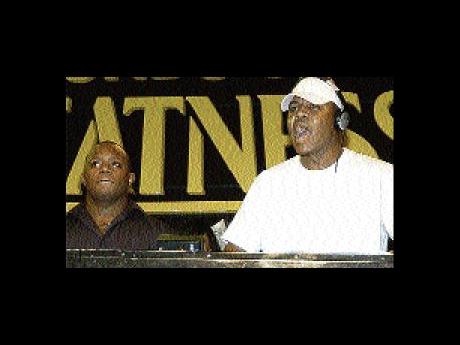 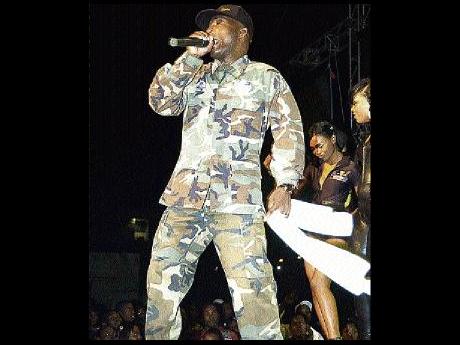 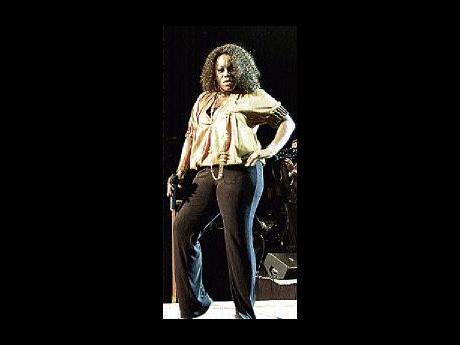 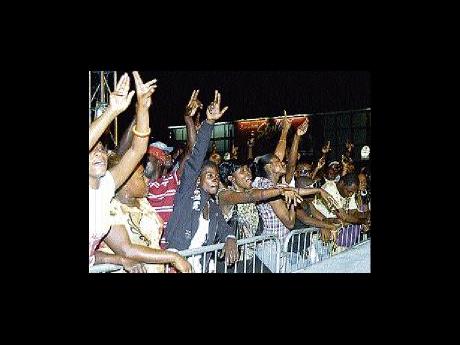 Damian (left) and Mark, of Bass Odyssey, get into the vibe at the Guinness Sound of Greatness 2009 Grand Final between Bass Odyssey and Sound Trooper, held at Mas Camp, Oxford Road, New Kingston, on Saturday night. - photos by Winston Sill/ Freelance Photographer

Bass Odyssey did not simply beat Sound Trooper to win the Guinness Sounds of Greatness 2010 title and a $1 million first prize on Saturday night. Odyssey spanked, whipped, decimated, humiliated and destroyed their dancehall elder in an incredibly lopsided final.

The St Ann sound system could not have asked for a larger crowd to display their maintenance of clashing form, even after the death of their celebrated 'war selector' Kirk 'Squingy' Bennett, who a black-clad Odyssey selector Damian mentioned continuously throughout the three rounds of music to their greatness.

With free admission to those toting an invitation and many touts outside Mas Camp, New Kingston, selling invitations well below the $500 entry fee to those without one, it was announced just before the final segment that no one else was being let in, as the venue had reached capacity.

When judges Squeeze and Smurf announced the final points standing it could have been anticlimactic. The result had already been as clear as the view of the stage from the rear of the audience, when the last dub plate dust had settled and the MC asked those who thought Sound Trooper had won to raise their arms. Fewer than 10 went up. On the other hand, when he asked those who thought Bass Odyssey had triumphed to signal their opinion, the stage was temporarily obscured from the same vantage point.

Even Assassin, in a good performance before the points standings were announced, changed a line in Han Up Inna De Air to "Bass Odyssey win an everybody know a true". During the clash, his take-off of Hand To Mouth, instructing Trooper to "Shut yu mout!" had landed a thunderous blow. And Busy Signal, who performed before Assassin, started out paying respects to the winners and saying "Bass Odyssey rise again". His dub plate of One More Night had hit home for Odyssey.

I-Octane had performed just before the clash started, Lose A Friend among the numbers which struck a chord with the audience.

Still, as clear as the outcome was, the final points standing were still astonishing - 520 points for Bass Odyssey, 264 for Trooper. However, if only the boos of the crowd were scored the see-saw would have tipped the other way, with a multitude for Trooper and very few - if any of significance - for Odyssey.

With Bass Odyssey almost doubling Sound Trooper's points, it was similar to being nearly lapped in a 1,500-metre race, three and three-quarter turns around the track. It should have been exactly three turns, as it was announced that there would be a half-hour juggling round, a tune-for-tune exchange of 15 commercially released records and then 13 alternating dub plates each. However, the tune-for-tune round ran to 16 records each.

Ironically, Bass Odyssey, going first in the juggling after winning the toss, did not have the best of party rounds. There were cheers from the crowd when Ricky Trooper appeared onstage in camouflage, bouncing like a boxer in his corner before the opening bell. And Sound Trooper came out swinging, with a battling take on You Raise Me Up by Lukie D and a dub of Ghetto People Song by Everton Blender which roused the audience. But when he paid respects to Squingy and added, "Yu neva badda dan me", there were boos. They got even more when he played a dub plate that said "Bass Odyssey soun' gonna die/Dem lie down wid Squingy tonight".

Then, in the tune-for-tune segment, Bass Odyssey winning the toss and sending Trooper first, he played Junior Murvin advising "so don't put your hat, where you can't reach it", which went over well enough, though far from spectacularly.

It was all downhill - and rapidly - for Sound Trooper after that. On the ninth exchange of dub plates in the final round, when Damian asked "a waapen to Likkle Trooper?" and played "Trooper dead easy, easy" to howls of delight, Trooper had capitulated. "Bass Odyssey, everything good," he said, playing a song and cutting it very short to absolutely no response.

When Bass Odyssey collected the big trophy, Damian handed it down to supporters who clustered around the stage, asking them not to destroy it, before inviting Odyssey selectors Lexi and Country Speng (who had piloted Bass Odyssey to victory over Coppershot) to play for the rest of the night.

About the only thing Sound Trooper won at the Guinness Sounds of Greatness finals was the coin toss to decide who should go first in the dub-for-dub section.

left: Ricky Trooper trying to rally the support of the 'troops' during the Guinness Sound of Greatness 2009 Grand Finals between Bass Odyssey and Sound Trooper.

Right: MC Elva takes time out to strike a pose for the cameras during the Guinness Sound of Great-ness 2009 Grand Final.

Crowd reaction is an integral part of any sound clash, and here, patrons get ecstatic for their favourite selector at the Guinness Sound of Greatness 2009 Grand Final.