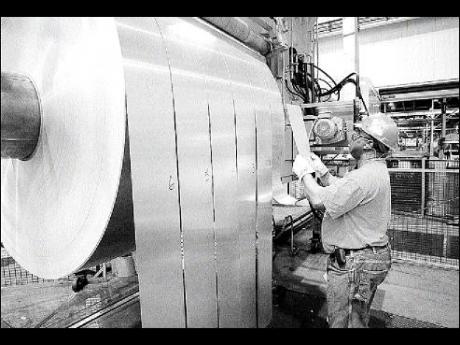 Finished rolls ofaluminium as they come off the last stage of the production line at the Alcoa Warrick Operations plant in Indiana, April 7, 2006. - File

Alcoa Inc on Monday reported a smaller net loss for the fourth quarter, though revenue shrank as higher metal prices were offset by ongoing weakness in aerospace, construction and gas turbines businesses.

Alcoa's quarterly performance marks the unofficial beginning of the earnings season for S&P 500 companies, and it can be a sign of things to come. The report was released after the market closed and Alcoa's shares fell in aftermarket activity.

The most recent quarter included US$275 million, or 28 cents a share, in special charges, including restructuring items and charges stemming from production that was idled at two Italian smelters.

Alcoa said free cash flow turned positive for the first time since the second quarter of 2008, a sign the company was able to generate money from operations and not solely through cost-cutting.

In a conference call with analysts, Alcoa officials said they expect the key markets to improve in 2010, but they are not at their historical normal levels.

Although the aluminium market has a modest surplus, the officials said they expect Alcoa to continue to grapple with currency-rate issues and higher energy prices.

Alcoa struggled as the recession dried up demand and metals prices plummeted. It has cut jobs and capacity at its plants.

In the fourth quarter, Alcoa saw a nine per cent increase in the realised price of alumina, yet that was offset by higher energy prices and the effects of the weaker dollar in its overseas operations.

Analysts had been looking for better sales in the company's aerospace and construction businesses, after a year in which major corporations salvaged profits with severe cost cuts.

Alcoa reported results after the market closed and shares tumbled 88 cents, or five per cent, to US$16.57 in aftermarket activity.

Shares set a new year high of US$17.60 during the day's trading session.