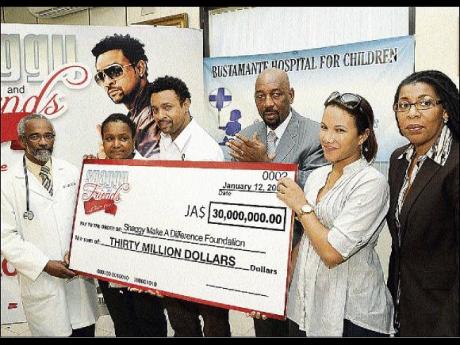 Touched by several heart-rending cases of children dying at the Bustamante Hospital for Children, international reggae superstar Orville 'Shaggy' Burrell, the man behind the Shaggy and Friends Make A Difference Foundation, disclosed that he was happy to help.

His assistance over the years has raised millions of dollars through his annual charity concert. This, twinned with donating equipment to assist sick Jamaican children at the hospital, has made a difference in the lives of several individuals.

Such is the case of the family of little Ashley Anderson, who was shot in the head at her downtown Kingston home in 2008.

Ashley's father, Jason Anderson, who was present at a Shaggy and Friends press conference yesterday at the Bustamante Hospital for Children, praised the 'dare to care' team. He said he appreciated the work that had been done over the years.

The father disclosed that he became suicidal before he realised help for his daughter was at hand.

Ashley, who had attached herself to Burrell's heartstrings despite lying helplessly on a hospital bed, had benefited from equipment purchased through the Shaggy and Friends Foundation.

There were other cases the entertainer spoke about with much passion, saying each had driven him to dedicate his time to helping the nation's children.

The entertainer said, as was customary, this year's annual event was a success, with the foundation raising $31 million for the only children's hospital in the island. He said he was pleased with the support of his fellow Jamaicans.

"Hopefully, we can come up with some great equipment that can make a difference. It was an incredible success and I thank you all for the opportunity," said Shaggy.

"When you look at one (child) being saved by this, it really warms my heart to know that we here have made a difference," Burrell added.

Chief executive officer of the hospital, Beverly Needham, praised the work of the foundation, saying the contribution would decrease the many items on the hospital's needs list.