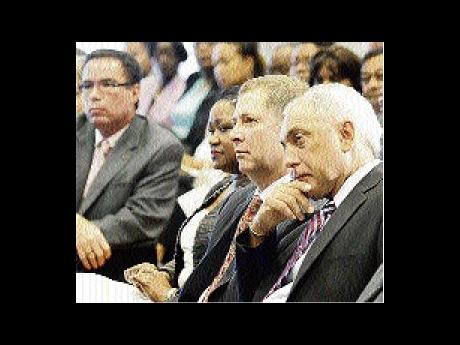 Jamaica Money Market Brokers (JMMB), a big domestic holder of government bonds, became the first financial institution to formally announce that it will take up the full debt-restructuring offer under which the Golding administration plans to call in more than $700 billion of domestic debt and reissue new bonds at lower rates and longer tenors.

Other players in the Jamaican debt market broadly signalled support for the plan, as one way to help the country out of its fiscal crisis, but no one has yet gone as far as JMMB in its embrace of the initiative that Prime Minister Bruce Golding, Finance Minister Audley Shaw and government and central bank technocrats laid out in detail during a meeting at the Bank of Jamaica (BOJ) on Thursday.

Hours later, Dominique Strauss-Kahn, managing director of the International Monetary Fund (IMF), announced that his technical staff had approved the SDR802.5 million or US$1.25-billion equivalent standby agreement 'in principle' and that the executive board would review the facility in a few weeks, with no date specified.

Jamaica, however, expects that review to happen on January 27.

The facility, Strauss-Kahn said, would 'catalyse' about US$1.1 billion in funding from other multilaterals, with expectations that some of the funds will be used to widen the social safety net by no less than 25 per cent.

Non-financial sector lobbies, including Jamaica Chamber of Commerce, Jamaica Employers' Association, Jamaica Manufacturers' Association and the Private Sector Organisation of Jamaica have all urged support for the programme.

The Government currently pays, on average, upwards of 20 per cent on its domestic instruments, but the reissued offers will carry coupons of about 12.25 per cent on average.

"We believe that that this debt exchange is for the national good and, therefore, I am pleased to announce that JMMB's board of directors approved a 100 per cent participation in this debt exchange," Group CEO Keith Duncan told a gathering of bondholders and government officials where the details of the plan were officially unveiled.

The board approval was on Wednesday.

A broader, but less unequivocal statement was issued on Thursday morning by the Jamaica Securities Dealers' Association and Jamaica Bankers' Association, which also supported the broader programme in principle, but said in a joint press release they were still awaiting final details of the debt-exchange programme.

Bondholders have until January 26 to take up the offer and the Government has indicated that it will move ahead with 90 per cent support although it is pushing for full backing.

The restructuring forms part of a deal with the IMF under a 27-month standby facility which, in turn, should trigger another US$1.05 billion from the Inter-American Development Bank, the World Bank (US$400m), and Caribbean Develop-ment Bank (US$40m).

Some financial institutions are still nervous about the impact on their balance sheets - even with the US$400-million fund to be administered by the BOJ - and whether, as one New Kingston operation put it, the exchange would be commercially justifiable.

Even as this stage, there are some players who are trying for a 25 basis point improvement in the offer to about 12.5 per cent, said one analyst, but who also said it is unlikely to be a deal breaker.

JMMB's immediate embrace of the plan was hardly surprising given Duncan's long campaign for some form of reorganisation of Jamaica's debt - for which he, and fellow campaigner, Donovan Perkins, the CEO of the Pan Caribbean Financial Services Group, were hailed by Prime Minister Bruce Golding at yesterday's briefing.

Though far more modest than what is now on the table, that initiative collapsed when the Government retreated from it in the face of warnings from the international rating agencies that the restructuring, although voluntary and limited domestic obligations, would amount to a default.

In any event, the plan was among the reasons cited by Standard & Poor's for its downgrade of Jamaica, pushing the country's debt deeper into junk-bond territory.

Minna Israel, speaking in her role as president of the Jamaica Bankers' Association, declared the initiative a good thing for Jamaica, but stressed that it had to be accompanied by tight fiscal management and discipline lest the parties be called back for similar exercise not too long from now.

"And we can't afford that," she said on Thursday.

However, Israel did not specifically signal the posture of RBTT Bank Jamaica, whose operations she heads in Jamaica.

Similarly, Bruce Bowen, the president of Scotia Group Jamaica Limited, gave a testimonial in favour of the programme in which he highlighted the importance of a strong economy for the sustained strength to the financial sector. He also stressed the requirement of fiscal management to the success of the debt initiative.

But Bowen, while he strongly suggested that BNS was on-board, he did not directly say so. He spoke of the offer in terms of "a decision" that "we" - presumably all market participants - have to make.

There was, however, no reservations