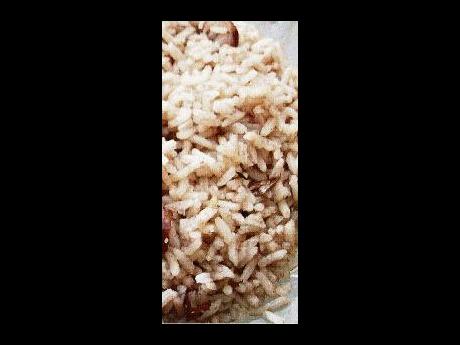 Add coconut milk, thyme, salt, scallion, pepper and other spices and bring to a boil.

Stir in the rice and allow mixture to return to a boil. Once it begins to boil, stir, reduce heat to low, cover and cook for 25 to 30 minutes, or better yet, until the rice is tender and has absorbed all of the liquid.

Allow to sit for 15 minutes before serving. Remove the thyme sprigs and Scotch bonnet pepper halves and serve. These are the ending procedures to a dish of rice & peas that has continued from generation to generation and can now be said to be the bastion of our Sunday dinner.

Rice and peas have grown to become a part of our Jamaican culture. It can be described as one of the staples of the Jamaican diet. Most times red kidney beans, better known as red peas, are used and are apportioned to suit the size of the multitude who will devour.

Other types of peas are also used. The most famous are pigeon peas - also known as 'gungo' peas - especially during the Christmas season. Cow peas and sometimes peanuts are also used! The type of rice is also dependent on the cook, but unlike peas there isn't as wide a variety. Some may feel a little creative and wish to make their batch more succulently appealing and include the use of beef, salted pork and/or any other meat of a salted nature to substitute the conventional salt.

What extra ingredient do you like in rice and peas?

I love when my mom adds a cache of cock soup to her rice and peas. It gives off a tantalising aroma and an unforgotten taste. Yummy!

A piece of pig's tail will do it for me. I like when dad chops it up fine so by chance I will get a little surprise while shovelling the rice and peas down my throat.

Might sound weird but, I like to taste a bite of salted fish in my rice and peas. It makes eating the meal more exciting, especially when there are no dinner talks.

Ginger as a spice, gives the rice and peas a nice kick to it, forcing me to enjoy the meat/vegetable kind and eventually causes a massive eruption of flavour in my mouth.