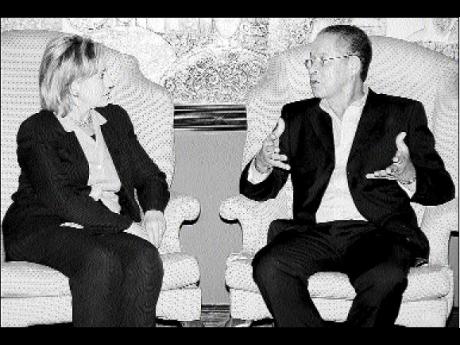 Left: United States (US) Secretary of State Hillary Clinton gives full attention to Prime Minister Bruce Golding in the VIP Lounge of the Norman Manley International Airport last night. Clinton, who was on her way from Haiti where she had gone to get a first-hand look at the relief efforts under way in that earthquake-devastated country, had a short meeting with the prime minister and other government officials before leaving the island. The brief talk was focused on how Jamaica could collaborate with the US in the rescue operations in Haiti. - Norman Grindley/Chief Photographer

A policeman wept bitterly after realising he had fatally shot one of his colleagues in the busy downtown area of Montego Bay yesterday.

The shooting led to chaos and confusion in the Second City as the body of the dead policeman, identified as Metro McFarlane, lay on Orange Street. His white shirt was splattered with blood, his lifeless feet bent behind him, while a large crowd fought frantically to see him.

Reports are that McFarlane, who has been on suspension from the Island Special Constabulary Force for the past year, tried to apprehend a pickpocket who had robbed a tourist at a restaurant on Harbour Street.

It was while he chasing the thief from Harbour Street on to St James that he fired a warning shot in the air from his licensed firearm. It is reported that the policeman, who was recently transferred to the tourism capital, saw what was happening and accosted McFarlane.

shot in chest and foot

Several shots were fired and McFarlane was shot in the chest and foot.

According to eyewitnesses, they heard when McFarlane identified himself as a member of the force.

During the shooting along the busy thoroughfare, a Jamaica Union of Travellers Association operator, who was driving on St James Street, was grazed by a bullet that went through his bus, ricocheting into a store window.

A blind man was also reportedly caught in the crossfire.