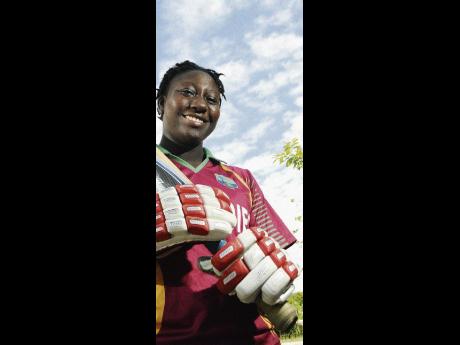 Shy and humble, that's how Stafanie Taylor comes across. The sportswoman hates interviews and would prefer to prove her prowess with a cricket bat rather than words. The 18-year-old all-rounder was named Jamaican Cricketer of the Year in December last year and she was nominated for The People's Choice Performance of the Year in the RJR's Sportsman and Sportswoman of 2009 award. But you wouldn't hear her willingly tell you any of those achievements.

"If they do hear that I play cricket, the first thing they ask me is: Are you Stafanie Taylor? Sometimes I say no," Taylor said. "But most of the times I say yes." By the way, it is Stafanie as opposed to Stefanie due to a slight mishap when she was registered at birth.

The sometimes negative response, she said, is simply because she does not enjoy the limelight. So how does someone who seems so reserved muster up the courage to play a sport in front of hundreds of people? "Once that ball hits my bat, it all fades away," said Taylor, who admitted the nerves can take over when she approaches a pitch.

But for some, it might be incomprehensible that Taylor, who is on the ball in her sport, could be nervous. The Jamaica and West Indies player has notable achievements in the sport. She is ranked ninth in the world in the women's one-day rankings, has a record of 485 runs at an average of 37.3, including one century and two 50s in 14 one-day matches. In 20/20 matches, she has 171 runs at an average of 28.5 with two 50s.

The girl from a small community, Gordon Pen in Spanish Town, grew up playing with a different ball.

"I used to play football, going to primary school," she said. When she was about eight, she saw her now personal coach Leon Campbell, practising a cricket shot and it piqued her interest.

"I asked him 'what was that?' He told me it was a cricket shot. So he asked me to try it and that's where I started out."

Her love for the sport grew, while she balanced both balls, cricket and football. But it eventually became apparent, she had to choose.

"I figured I could travel the world more playing cricket than football," she said. And travelled she has. The small-town girl went on her first tour to Guyana when she was just 10 years old. Since then, she has travelled to Australia, England, Sri Lanka, South Africa and most of the Caribbean Islands.

"Now, I love cricket. I eat, sleep and drink cricket," said the former Eltham High School student, who represented the school (the only girl on the team) at the Under-14 and Under-16 level. She isn't sure where the talent came from, though.

"I don't know where I got it from. My brother said I got it from him. He loves cricket." But no one else in her family has played the sport seriously. Her mother used to be a track and field athlete in high school and some of her siblings have followed suit.

Taylor believes there is scope for expanding female cricket in the Caribbean, if there is more publicity of the sport.

"It's not shown on the TV, so that's a big factor," she said. However, there are pockets of interest, regionally and internationally, and she believes it's worth the female sportswoman's efforts.

Currently, she is working on finishing her CSEC exams at a private institution. She is not certain of her academic goals afterwards.

"I would just love to finish here and go to college, maybe in England, and play cricket," she said.

As it stands, her next professional goal is to become the youngest female cricketer to score 1,000 runs in one-day internationals.

"Sarah Taylor (an English cricketer) has it now at 19, so I don't have much time," she said.