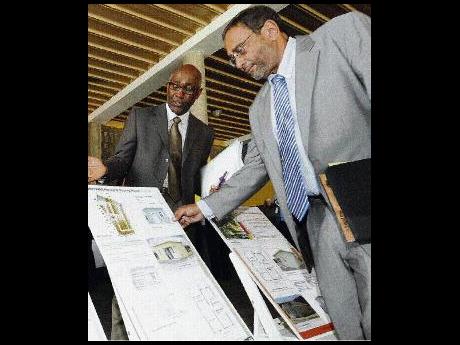 Prime Minister Bruce Golding has appointed a new board of directors to oversee the National Housing Trust (NHT), an agency now facing tough scrutiny after allegations by the contractor general of fraudulent contract awards.

Thirteen of the former directors retain their seats, including Chairman Howard Mitchell, but not Earl Samuels.

Samuels' employment contract as managing director (MD) was not renewed at expiry in December 31, 2009, but he continues to run the agency up to the end of January while the search for a replacement continues, the NHT said Wednesday.

He has been boss of the NHT for 11 years, since January 1, 1998, over which time the agency has grown into a $116-billion behe-moth by assets, including a $70-billion fund to drive housing construction for middle- to lower-income groups.

There is no connection between Samuels' departure and the con-tract probe.

Four NHT employees were implicated, however, and sent on leave.

Contractor General Greg Christie went public on his probe of the Trust in January, spurred, he said, by threats to the life of one of his employees in relation to a contract scam extending to individuals outside the housing agency.

Mitchell said the NHT was cooperating with investigators.

Other board appointments not renewed were: Ena Barclay, school principal and former president of the Jamaica Teachers' Association, who was first named to the board in November 2007; permanent secretary for the housing ministry, Genefa Hibbert, who has done three 2-year rotations on the board since 2003; and former permanent secretary in the Office of the Prime Minister, Patricia Sinclair-McCalla, who was first appointed to the board in 2005.

The new board has 16 members, down from 17, including an unfilled slot for the MD.

Mitchell said in December that a new candidate for the job to run the agency would have emerged by the end of January.

The board appointments, which have been endorsed by Golding's Cabinet, took effect January 1, 2010 for two years.

The new NHT board