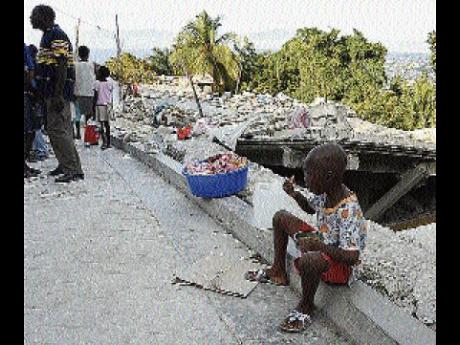 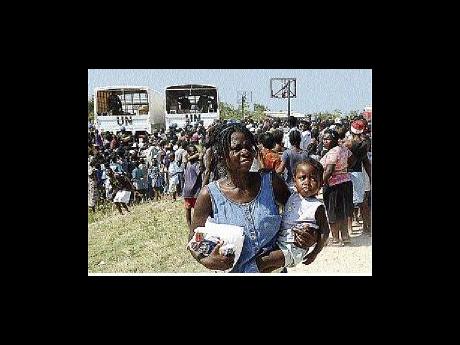 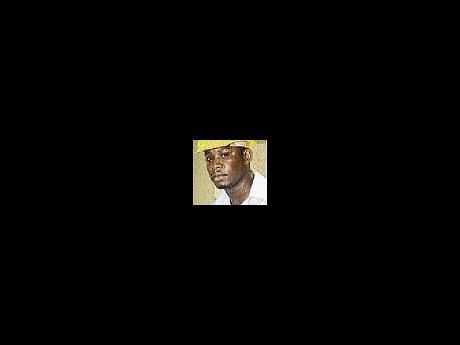 Imagine walking miles up the most rugged of hills in Haiti in search of food only to get there too late.

But the situation is far worse if your entire family went to bed hungry the night before and appeared set for a second such night without food.

It was the stark reality that faced Jean-Farnel Oastil after he arrived on the summit of Decayette, in Haiti's deep countryside, only to find that supplies had dried up.

Hundreds of Haitians had climbed the dusty hillside to collect food, diapers and bed linen being distributed by the Jamaica Defence Force (JDF). The food items were gifts from by the Jamaican people.

Getting to the distribution point for the JDF required skilful manoeuvring of the trucks along a narrow roadway on to which nearly all families had relocated their homes.

The birthmarks and battle scars of a wholly underdeveloped Third-World nation had their brands all over. Rickety houses, garbage-littered streets and worn clothes were the first signs of the battle. Then there were the stares of desperation on many faces.

The smiles that the distribution of just a pack of cookies brought to the faces of children were tear-jerking.

For nearly all of them, the one biscuit was not enough, and many outwitted the soldiers by joining the lines several times to collect the food.

Adults who got a can of meat, oats, biscuits and bed linen rotated babes so they could be placed in priority lines.

One elderly woman required 18 stitches on her leg to close a wound that was inflicted my a man who hit her with a stone and stole her blanket.

She went home injured and unhappy. And so, too, did one man who complained bitterly after he was given a tin of tuna. Although he was unable to speak a word of English, he waved his hands frantically, indicating that his family was large and that the food was not enough. He then walked down the hillside, cursing to himself as he left with the single item in hand.

But Jean-Farnel was in no mood to walk away cursing. He was hungry. He said his family was hungry too and that they were depending on him for food.

Luckily, the Jamaica Defence Force had kept a few items back. With the assistance of JDF personnel, I was able to secure some food for him.

This woman and the baby on her arm are two of those lucky enough to arrive early enough to receive much-needed relief from the United Nations and Jamaica Defence Force soldiers in the town of Decayette, Haiti, yesterday.

"I thank you so much," Jean-Farnel repeated as I presented him with the food.

Jean-Farnel described life since the earthquake as frustrating. He said all he had now was hope and had vowed not to let that little flame die.

"I hope the country will change. You can see that the situation in my country is poor and now the earthquake has destroyed the jobs and schools. All that is left is hope," he said.

"I just hope that the stronger countries can continue help us so we can continue to survive because it's by their grace," Jean-Farnel added.

That hope is not confined to Decayette.

An orphan at a home in Jesus Miracle chews on strips of paper. He had not tasted real food since the earthquake which killed 59 of the 128 children at the home.

Jean-Farnel wants to change that. He wants to see the end of the days when Haitians will depend on the benevolence of other people.

Lucson Doricil, a 24-year-old college graduate, also has that burning desire to transform his country.

"There are so many children who live on the streets. Many don't have health and can't go to school. I hope for a better Haiti," Doricil said.

Jean-Farnel, too, has pledged to keep his undying love for his country burning.

But his immediate needs are clear. His family is hungry and the few items I was able to secure for him are like gold.

After saying no less than five "thank-yous", he tucked a box with the few items of food under his arm and headed home.

His slippers, however, were in no condition to make the trip down. The straps gave way in mid-stride but that did not make his journey back to fill the bellies of his loved ones any slower.

This youngster sits and eats on the side of the road. Eating in Haiti is not a simple thing and is fast becoming a luxury. - photos by Ian Allen/Photographer

Belgium: one dead, one missing.

Chile: one dead, one missing.

Mexico: one dead, 58 missing out of 138 believed to have been living there.

Uruguay: one dead, two missing (including a three-year-old).

United Nations: 49 confirmed dead and more than 300 unaccounted for. Some personnel may also be included in national counts.