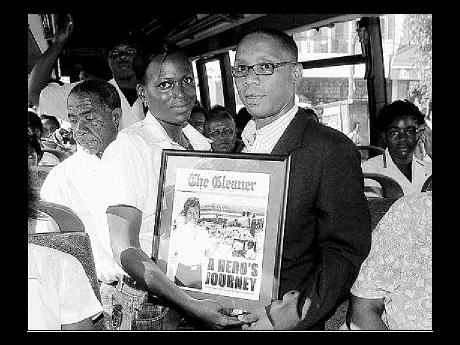 Jamaica Urban Transit Company (JUTC) bus driver, Annette Howard (left), receives a framed photograph of herself at the recent American Airlines jet wreckage from Brian Bonitto, the Gleaner's Special Projects Editor. Howard was lauded by The Gleaner Company for her heroic efforts in rescuing some of the victims of the crash. The surprise presentation was made in a JUTC bus filled with passengers in downtown Kingston yesterday. - Winston Sill/Freelance Photographer

Howard laughed as the woman gripped her arm and told her how happy she was to be in such great company. Howard saw when the flight overshot the runway and ran in the rain to get to passengers so she could take them to safety.

Yesterday, The Gleaner caught up with Howard while she was on the job. Passengers lined up downtown Kingston and quietly paid their fares. Howard sat in the driver's seat and as she cashed in passengers one by one, she provided a follow-up on her rescue mission.

"I talked to [an airline passenger's] mother. She said that he was still in the hospital with broken bones. I think broken ribs," she said.

"I also met someone else who said his daughter and son-in-law were on the flight as well, and I helped them too."

For Howard, life continues. Despite what many call a heroic deed and her status as an 'angel', she is unknown by some. Upon realising who she was, the bus load of passengers applauded and started whispering among themselves.

A high school student remarked, "Bless up, bless up."

Annette Hall, a colleague, said she was not surprised when she heard Howard had helped saved the injured airline passengers.

"[Howard] is a really nice person," Valerie Warmington, Howard's supervisor at the JUTC, said. "She has never refused a duty."