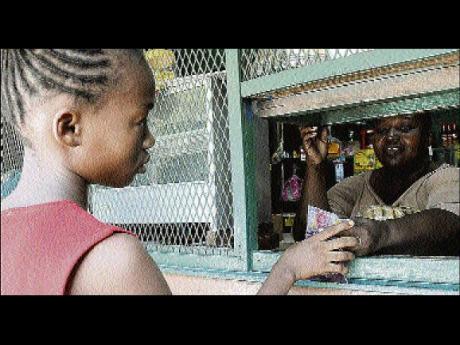 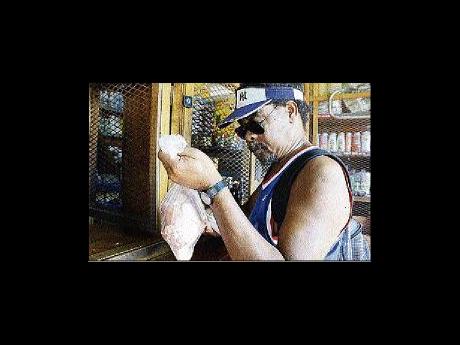 Rudolph Brown/Photographer
Carmen Smith, owner and operator of Fatty Shop in the west Kingston community of Fletchers Land, hands one of her 'best-sellers' - bag juice - to a little girl from the area.

Operators of the small grocery shops, which can be found in most communities across the island, are struggling as rising prices force their customers to consume less.

A Sunday Gleaner team recently visited a number of these small shops in Kingston where operators recited their tales of woe.

Our journey started at Fatty Shop in Fletcher's Land, west Kingston where Carmen Smith, a 48-year-old mother of one, is battling to keep the doors open and earn a living.

"So, how are things going?" our news team asked as we leaned forward to look through the rectangular window, at a counter which is not seeing much activity these days.

"From you look inna di shop you shouldn badda ask," Smith remarked, referring to the conspicuous absence of goods in her shop.

Several shelves in her shop were bare - a rather chilling testament of the tough times being faced by Smith.

The crunch is on and Smith is feeling the squeeze. These are the hardest times Fatty Shop has seen since she opened its doors more than 12 years ago.

But Smith, a woman of faith, believes God is working it out for her, even though she does not have all the goods she needs to sell to earn a living.

"Only God knows," she says of how she manages to keep her shop doors open.

Despite the slow business, Smith says she still 'trusts' (credits) goods to her customers. Up to Friday, she was owed some $7,000. But even if she collects every cent, that could not fill the empty spaces on her shelves, she said.

"That (would) just lost pon di shelf," she said shortly before breaking into song. "Everybody smile (Jesus loves you)," she sang with nonchalance, seemingly encouraging herself.

Smith told our news team that it would be hard to say what was selling the most these days because she did not have all the items in stock. "But bag juice sell more than anything else," she said.

There are at least three other shops on the short stretch along Church Street where Fatty Shop is located.

Ackee Tree Hideout, 'a dry goods shop' is one of them. The small wooden structure is owned and operated by 32-year-old mother of three, Camille Hudson. She, too, says her shop remains open by the grace of God.

Hudson told The Sunday Gleaner that one of her business strategies included not giving credit to all and sundry. "Anyway you tek it, you affi trust (give credit), but you nuh really credit any and anybody," she said.

Next stop: a corner shop in the Spoilers area of central Kingston, which is ironically located at the corner of Wildman Street and Beeston Street and is aptly named - you guessed it, Corner Shop.

In stark contrast to Fatty Shop, the shelves of Corner Shop are stacked. Things are going well it seems. Not so, says the operator, who gave her name as D. Robinson. "That fi show you seh nutten nah sell."

Corner Shop is the largest of the shops our news team visited and Robinson said it had been in operation for some two years.

She, too, is selective with the customers who are given credit. "Mi have one and two customers weh mi trust," she said.

The competition is stiff in the corner shop business. During our tour of downtown Kingston, several shops were seen within a stone's throw from each other.

They are either on the same stretch or around the corner and they are all competing for the rather thin disposable income of their fellow inner-city residents.

It seems some of the shops have gone belly-up as a few doors on buildings resembling shops were seen shut in broad daylight.

Still, many remain in the struggle, sometimes absorbing the price increases just to stay afloat.

The shop owners know the hardships because they face them too, and wisdom tells them any increase in the price of certain goods will leave them on the shelves.

Jennifer Jones, owner and operator of a corner shop in Allman Town, told our news team that most of the money she earned from the shop went right back into re-stocking the shelves.

Her best-seller list includes bullas, buns, snacks and sodas. "The glass case and soda - ah that really a hold up di shop still," she said.

Jones believes "trust mash up business", so she limits the number of people, about three of them, to whom she gives goods on credit.

Corner shops, the majority of which earn less than $3 million per annum, are not mandated to collect GCT (general consumption tax).

A customer inspects his three and a half pounds of chicken parts he ordered from Corner Shop, which is located at the corner of Beeston Street and Wildman Street in the central Kingston community known as Spoilers.