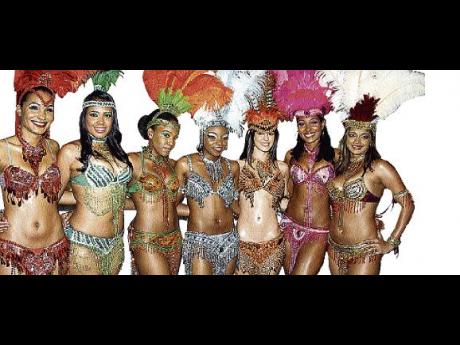 An array of colourful, stylish costumes will be on parade for Bacchanal Jamaica's 2010 carnival season, under the theme Bacchanal Treasures. - Winston Sill/Freelance Photographer

Bacchanal Jamaica organisers are promising 10 weeks of a 'feel-good' atmosphere for the 2010 carnival season.

The event was launched last Wednesday at The Knutsford Court Hotel in New Kingston.

The promoters urged revellers to come out and enjoy the festivities as they celebrate 22 years of carnival in Jamaica, and 10 years under the Bacchanal brand.

February 5 will be the grand opening of the Bacchanal Carnival season at Mas Camp on Oxford Road, New Kingston. This will continue each Friday night leading up to the much-anticipated road march on April 11.

As usual, the celebrations will be boosted by live appearances from popular soca artistes, including Destra, The Imij and Company Band and Machel Montano HD. They will be complemented by several local acts and the 'Party Animal' Kurt Riley.

After the launch, costumes were displayed as onlookers were given a taste of what was to come during the carnival season. The costumes this year are Diamonds of Kilimanjaro, Gems of Rio Doce, Khalahir Sunstone, Bacchanal Babes, Stars of Asia, Treasures of Kashmir, Emeralds of Chivor, Aztec Gold and Burmese Sunset.

Another staple for the Bacchanal season is Socacise, which will also be held at Mas Camp. Socacise sessions last for two hours and is set to begin on Monday, February 8 between 6 and 8 p.m., and will be instructed by Pepper Dawson. It is free to the public.

• Soca at De Sandbar and Pan Fête on April 7.