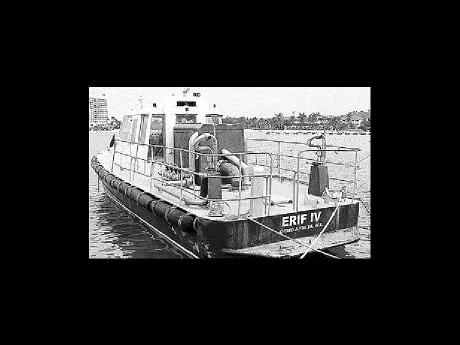 Seen docked here in Ocho Rios, with the Sunset Jamaica Grande at left, is the only fire boat in service in Jamaica. - Photo by Carl Gilchrist

The capacity of the Jamaica Fire Brigade to deal with fires on ships and other marine vessels, and buildings on the waterfront, has been severely reduced, as two of its three fire boats are out of commission.

And according to deputy commissioner in charge of operations, Errol Mowatt, it will take more than $180 million to rectify the situation.

The brigade needs to acquire a new boat for Montego Bay and repair the one in Kingston.

Faced with budgetary constraints, Mowatt admitted that the situation is a major cause for concern.

"As a fire brigade, if one unit is not working, that's a major concern. Right now, we're looking at working with other partners to see if we can expedite the process so we can return to full service," Mowatt said.

There is no fire boat in Montego Bay. The last one there was being removed to safe harbour in a freak storm when it was damaged beyond repair around two years ago.

In Kingston, the fire boat has been on dry dock for more than two years, awaiting additional funds to complete repairs.

The only boat in operation is in Ocho Rios, which, nevertheless, presents "a few challenges" related to mechanical operations, according to Assistant Superintendent Withsean Lamont of the St Ann's Bay Fire Department.

But it is working, he asserted.

Acting superintendent at the Montego Bay Fire Department, Dolfin Doeman, told The Gleaner the city has been without a fireboat for years.

"We don't have one. The one we had sustained damage some time ago and was taken out of commission in 2008. We had some severely rough weather and it was being moved to safe haven when it was thrown against some rocks and damaged beyond repair," Doeman explained.

Doeman said if there were to be a fire on marine vessels or on buildings at the waterfront, the department's response would be compromised.

Mowatt, under whose portfolio such matters fall, confirmed this, saying the cost to replace the fire boat was prohibitive at this time.

"Since then, we have been unable to replace it because it costs between US$1.5 million and US$2 million for a new boat. It is also pretty expensive to maintain," he said.

"There has been a severe shortage of funds as far as the Government is concerned. The amount was included in a subsequent budget, but because of financial constraints, we never got the funds."

Mowatt said the Kingston boat is much larger and much older than the other two, and has been out of service for some time. Although an effort is being made to effect repairs, this is going slowly. He said despite the age of the boat, it has a number of working years left in it.

"It has been out over two years," Mowatt explained. "We entered into an arrangement with the Caribbean Maritime Institute (CMI) for repairs to be done and this is being done in phases. Phase One has been completed for some time now and we're still in discussion with CMI to continue, but this is also affected by a lack of finance."

"We're looking at around $10 million to complete repairs. It is still on dry dock and we have a memorandum of understanding with the CMI, so we're anticipating a resumption of work in the not-too-distant future."

Fire boats generally have a much larger pumping capacity than land brigades, and can use seawater in its operations, giving it a significant advantage in case of a fire on the waterfront or on marine vessels.

The last major marine fire in Jamaican waters was the March 2006 razing of a section of the cruise ship, Star Princess. One passenger died and 11 others were injured. Approximately 150 cabins were burnt.