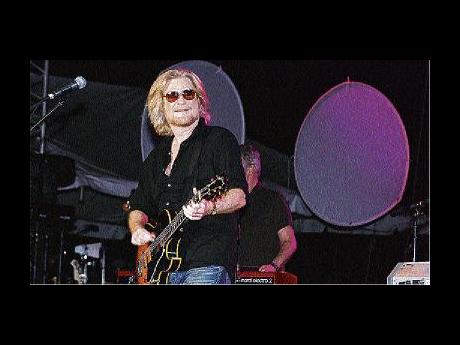 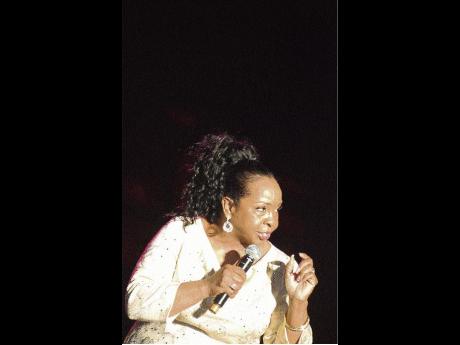 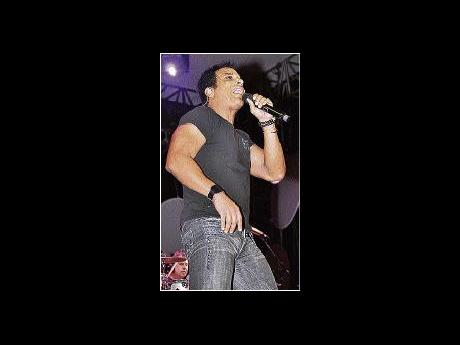 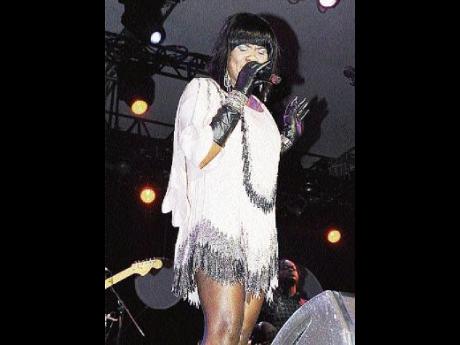 Daryl Hall from the duo Hall and Oates in a commanding performance at the Jamaica Jazz and Blues Festival at the Trelawny Multi-purpose Stadium on Saturday night. - Photos by Janet Silvera

An awesome, unequalled and commanding performance was how the great soul singer of all times, Gladys Knight, brought the curtains down on the 2010 Jamaica Jazz and Blues Festival at the Trelawny Multi-purpose Stadium on Saturday night.

Like a quiet storm, the Grammy Award-winning dynamo erupted throughout the grounds of the stadium, willing lovers to "save some overtime", while bringing back sweet memories of her 1961 hit, Life story.

Within an hour and 15 minutes of an energy-filled, high-tempo and thrilling delivery, emcee Paula Ann Porter-Jones didn't even need to ask the usual "Do you want more?" as the audience knew exactly what they wanted: "More and much more, Gladys Knight".

Knight was not selfish, as she shared the spotlight with the only other billed female act, Jamaica's Marion 'Lady Saw' Hall, whose complete and utter brilliance gave signs of musical growth. Hall gave 90 per cent of the 'Lady' in her, pimping a mere 10 per cent of the 'Saw' that many have come to know.

Between, Knight, the 'rock and soul' team of Hall and Oates, the unwavering Third World that compels you to rock to the sounds of 96 degrees, and the Latin heart-throb Jon Secada, the Jamaica Jazz and Blues Festival ended a week of activities with the reassurance that the festival has taken the road to its zenith.

In fact, Saturday night's production will go down in the event's history books as the crème de la crème of the festival.

Saturday's fireworks were ignited by Marion Hall, who wasn't readily recognised in her 'not normal' ensemble. But her get-up was not the highlight, it was the smooth hits like My Silly Heart, Love Hurts and Brown Eyes Blue and the engaging way in which she caressed the audience that won her immediate acceptance.

Gladys Knight delivering a stellar performance at the close of the Jamaica Jazz and Blues Festival at the Trelawny Multi-purpose Stadium on Saturday night.

When she drew for Less Than a Woman, which speaks to motherless women eager to conceive, the atmosphere around her became emotional. After 35 minutes on the stage, the real 'Lady Saw' appeared, belting Sycamore Tree and Healing, a reminder that versatility is part of this artiste's true makeup.

Lady Saw made way for Cuban-American singer Jon Secada, whose amazing vocals brought a difference to the stage. And it took pop music duo Hall and Oates to get the audience attention renewed.

Opening with the song Family Man, Hall belted to his heart's content, his guitar obeyed every command his fingers gave, and his voice lured even those at the back of the stadium to the front of the stage. When they did, TKO, if their complexion didn't look Caucasian, they could easily have passed as some of the brothers on Soul Train.

Leader of the pack

Complementing their set with the Manhattan's Love Train, the duo, in collaboration with Billy Ocean and Maxi Priest, gave a spine-tingling rendition of the black American group's hit song before making a final exit.

But it was Gladys Knight who followed Hall and Oates, that showed she was the leader of the pack, with her Motown hit, Let's Dance, Let's Shout, My Guy and Stop in the name of Love, scorching an audience already under heat from her performance.

Couples held on to each other tightly when she sang Goodbye, Teddy Prendergast's If you don't know me by now, and It takes a fool.

Knight herself became emotional after the song Goodbye, taking the festival to higher heights with I will survive.

Hers was a hard act to follow, but the indomitable Third World created a similar magic with the sounds of reggae.

Right: Marion Hall singing her soul out at the 14th staging of Jamaica Jazz and Blues festival.