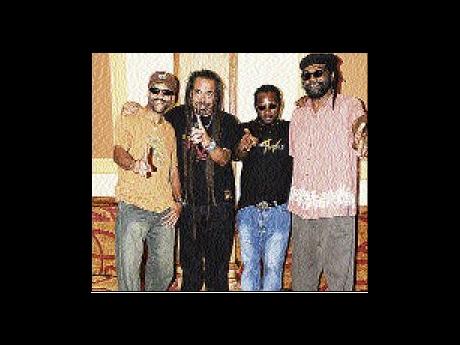 World-renowned reggae band Third World pays homage to some of Jamaica's National Heroes on its new album, Patriots. Patriots. The album, which highlights the work of Paul Bogle and Marcus Garvey, among others, is the group's 22nd album since its formation in 1973.

On the eve of its splendid performance at the 14th staging of the Jamaica Jazz and Blues Festival at the Trelawny Multi-purpose Stadium last Saturday, the group hosted a press conference at RIU Resort in Montego Bay to discuss issues related to its album, its 37th anniversary celebration, and reggae music today.

The album will be sold online and samples can be heard at www.thirdworld.com. Third World did a remix of their mega hit, 96 Degrees, featuring Damian and Stephen Marley, something Stephen 'Cat' Coore of Third World believes will be a welcomed twist to a classic.

"Normally, when you have something good, you don't want to change it, but we decided to add these splendid musicians on the track nevertheless. We still maintain the content but we wanted to add something a bit different," Coore explained.

Other guest musicians on Patriots are Tarrus Riley and Toots Hibbert.

As it relates to what messages the album will dictate, he added, "The Patriots album reflects messages that can be applied in today's society, so persons can expect to hear us address issues related to struggles, love and motivation on this album."

As one of the longest-running reggae bands, relevance is very important to Third World as the sound of music continues to evolve, according to bass guitarist Ritchie Daley.

"Our music is timeless and that is what keeps us relevant in today's music, and we would encourage our local musicians to do music that's timeless which will ensure longevity and not only limited to just today," said Daley. "There is music today, tomorrow and so there's always another day for music. At the end of the day, we want to know that another generation can appreciate what we have done and continue to do."