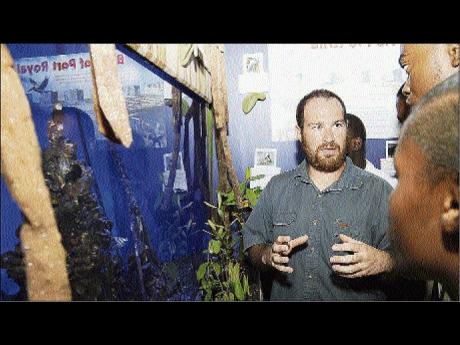 Raz Barnea (left), volunteer with the United States Peace Corps, explains the biodiversity of Port Royal to students taking part in a tour of the Marine Lab and the Port Royal mangrove forest in Kingston during yesterday's observance of World Wetlands Day. - Rudolph Brown/Photographer

Global warming could lead to Palisadoes going under water if Jamaicans do not take care of the wetlands, an expert from the Port Royal Marine Laboratory has warned.

The National Environment and Planning Agency (NEPA) yesterday used Jamaica's observance of World Wetlands Day as an opportunity to increase the public's awareness of wetlands.

The agency and lab officials provided attendees with insight into wetlands, also known as swamps, during a visit to the University of the West Indies (UWI) Port Royal Marine Lab and the Old Naval Hospital.

"[Jamaica] is our home, this is our rock. We have a God-given responsibility to take care of it for future generations," she said.

The lack of mangroves, along with global warming, would lead to the sea rising.

She also said bigger countries, including the United States and Russia, are not the only nations responsible for global warming through their burning of fossil fuels.

"A lot of what we do and our practices are part of the problem," she said.

Students listened, staring with unwavering eye contact, to Webber as she outlined the problems with common Jamaican practices.

Dumping plastic and other household waste into gullies creates problems for the wetlands, she explained.

Rubber tires and refrigerators are some of the objects found among the man-groves. Burning garbage in the mangroves also has a destructive effect on the wetlands.

When putting the creature and others back in their habitat, among the dark roots of the mangrove vegetation, Hall made certain to tell his passengers "be careful, don't throw them down hard".

The ecosystem has a hard time recovering from damage when the destruction is by man's hands.

"The natural system is built to recover," Webber said, referring to natural disasters.

Citizens can do their part in protecting the environment by reporting the lawbreakers to NEPA game wardens.

According to NEPA's Ava Tomlinson, these wardens are trained by the environmental planning agency and are based in communities across the island.

A 1990 estimate outlined US$462 million as the cost 10 years ago to protect Jamaica from the rising sea, Webber said.

"A lot of persons will destroy the mangroves to make fish pots," he said.

"Persons will cut these and we are working with NEPA in terms of enforcement," he said.

Boating across the harbour, one is greeted with many sights including pelicans diving for fish, fishermen picking away at objects for clams. Moving at a very slow speed allows persons to glimpse signs of underwater life such as sea creatures that resemble sponges.

"This is the real Spongebob," the guide said.

"You lose one and the others get affected.

"We have a habit in Jamaica of killing anything that looks strange. We need to stop that," she said.