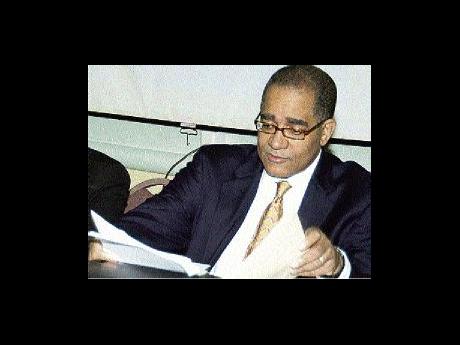 THE NEW governor can, therefore, expect to face questions on. Key areas of focus will include: the actions that have been taken under his watch in this regard, and the signals that have been sent to the market.

Bank of Jamaica (BOJ) Governor Brian Wynter will have his first quarterly press briefing - one of the most highly anticipated events on the financial calendar - next Wednesday and should expect a baptism of fire.

Since taking over the mantle of governor of the central bank, Wynter has stated publicly that under his watch, the bank will focus on its core functions - namely, the management of inflation and the maintenance of stability in the foreign-exchange market.

Inflation for fiscal year 2010-11 already appears to be a moving target.

The initial position indicated by the governor at his first news conference in December was that the bank was expecting inflation in 2010 to be the same as the outcome for 2009, which is in the range of 11-13 per cent.

Wynter then said in early January at the series of meetings held by Prime Minister Bruce Golding with key stakeholder groups to provide details on the Jamaica Debt Ex-change programme and the Government's letter of intent to the International Monetary Fund (IMF), when he clarified that inflation would be higher in the first quarter of 2010 (perhaps as high as 12-13 per cent) because the pass-through effects of the increase in the tax on gas, and increased cost of oil on the world market.

However, inflation should be reduced significantly in subsequent months in 2010, reaching as low as six to seven per cent, and as a result the central bank, he said, was projecting inflation for fiscal year 2010-11 at around 9.0 per cent.

Since then, the target has been shifted downward to a 7.5-9.0 per cent range.

But, with insufficient information on the underlying assumptions that inform the most recent revision, analysts are not ruling out an outcome of 13-15 per cent.

Besides the pass-through effects of the ad valorem tax on petroleum, and projections for rising oil prices this year, the other critical factor is the management of core inflation.

The target of single-digit inflation in the coming fiscal year could be constrained by the central bank's loosening of its demand-management system, by providing advances to the Government and temporary pur-chases of GOJ securities to the tune of around $35 billion, while at the same time precipitously lowering interest rates.

Also, the inability of the Government to access financing from the international capital markets, prospects for lower-than-forecasted revenue flows for the last quarter of the current financial year, as well as the expected slowdown in the economy through the upcoming fiscal year, require an assessment of the impact on the bank's demand-management programme.

Clearly, the recent BOJ temporary advances to the Government and the purchase of government securities have led to an expansion of the money supply. And at a time when the economy is contracting, this increase in liquidity in the system, coupled with a reduction in investor confidence in purchasing GOJ securities, could see investors seeking to convert their holdings into foreign-exchange instruments. This would increase the demand for foreign exchange and tighten pressure on the foreign-exchange rate.

Given the fact that the BOJ, effectively, will not be able to use high interest rates as a means of mopping up excess liquidity in the system, and in a contracting market there will be limited supplies of foreign exchange outside the flow from the multilateral lending agencies, it is to be expected that Wynter and his team will attempt to manage the forex rate using the net international reserves. The central bank has used US$50 million for interventions in January, and the NIR has fallen to about US$1.6 billion or slightly below three months of export cover, the Financial Gleaner has learned. The question here is whether this will be adequate to ensure stability.

Already, there are signs of heavy demand, and limited supplies of foreign exchange, with the BOJ having to be quite active in the market in recent weeks.

Part of the delay in the presentation of the Government's letter of intent to the executive board of the IMF has been the IMF staff's insistence on ensuring that Jamaica successfully undertake the main preconditions prior to the approval of the US$1.25-billion standby facility. These are the increased tax package in December, successful execution of the Jamaica Debt Exchange and the divestment of Air Jamaica.

The major sticking point at this time is the divestment of Air Jamaica.

Sources close to the fund in Washington indicate that despite the fact Jamaica and Trinidad signed a letter of intent on January 22, in which both parties agreed to give best efforts to ensure that the airline is handed over to Caribbean Airlines by June 30, the agreement is non-binding.

However, IMF staff have indicated to the board that despite this, the key timeline for divestment of the airline remains intact, and they have asked the board to approve the loan under the proviso that the IMF team will revisit the divestment process as part of the first review at the end of March.

A March 31 deadline is in play for the signing of a binding agreement on the sale.

So, the question for Wynter will be whether any further delays in the Air Jamaica divestment process will impact the passing of the first IMF test, whether there is wiggle room, or will it lead to the imposition of additional conditionalities - and the effects on BOJ's ability to manage monetary policy.