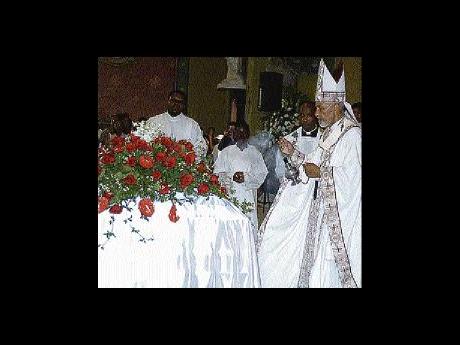 Hailed as a champion of education and stolid defender of Roman Catholic values, archbishop emeritus of Kingston, the Most Reverend Laurence Burke, SJ, was laid to rest on the grounds of the Holy Trinity Cathedral after a funeral Mass that lasted more than two hours.

Approximately 2,000 persons attended to pay their respects to the former archbishop.

"He was a man of faith," the Most Reverend Patrick Pinder said in the homily.

"He was very much inclined to respond to social needs."

Voices were raised in song, and outside the church, behind a door, stood a homeless man mumbling a prayer and winding his beard around his index finger.

Pinder described the archbishop as courageous.

"Pain in parting is the price we pay for love and friendship in this world," he said, his voice echoing all around the cathedral.

For the first time since the beginning of Mass, smiles collectively crept on to the faces of those in the congregation during the peace offering.

"Bind us together with love," they sang in an upbeat rendition of the hymn.

Barrington Smith, who is involved with the church council, said the former archbishop was a "very personable" man.

He sat on the steps of the winding staircase at the back of the church, listening attentively to Mass.

"Although he was archbishop, when he spoke to you, you not only felt the authority with which he speaks, but also the love," Smith said.

Knights of Columbus were also present and they stood quietly and stiffly, with their swords at their side, holding their feathery hats to their shoulders in respect.

The knights make up a Catholic fraternal benefit society dedicated to helping people.

Echoes of the national anthem mingled with the sound of leaves moving in the breeze. Two Denham Town Primary students gripped photos of the archbishop tightly between their fingers.

Patricia Grant, one of the Mass attendees, said, "(Burke) was a teacher. He taught us to be humble, to pray and he taught us to obey."

Burke died on January 24 after battling with cancer. He was 77.