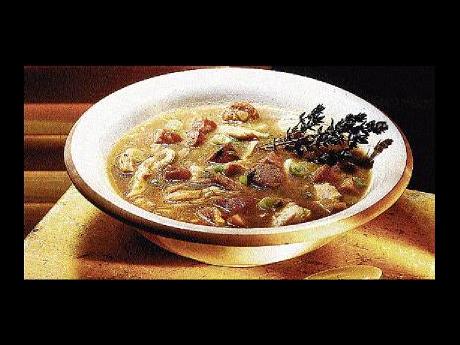 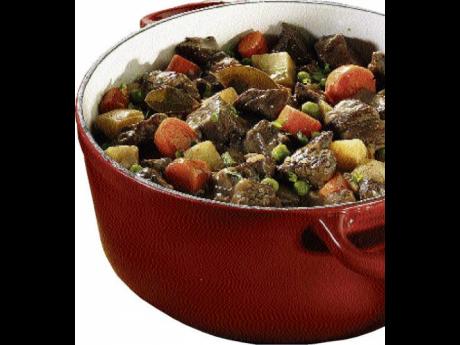 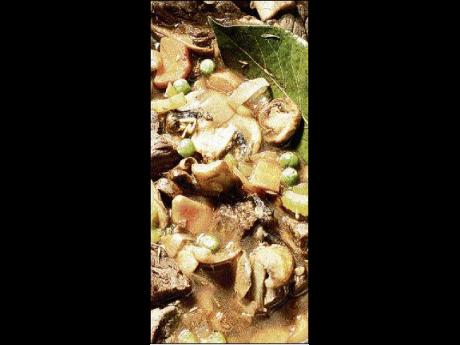 Gumbo, a comfort food popular from Africa to New Orleans, resonates with bold flavours and near-magical fixings. Originally called gombo, after the plant we call okra, it remains the most original of dishes because there are no limitations on the ingredients - whether poultry, seafood, meat or vegetables. It can be thickened by a roux, okra or file powder. - MCT photos

The diverse and flavourful cuisine which Jamaica has inherited has much of its historical beginnings in Africa.

The roots of the diversity of African culinary influences may be traced back to 1619 when the first African slaves were sold in the New World. African slaves, who were brought to the West Indies, brought their own vibrant and rich culture. Despite the harsh realities of slavery, African slaves retained a strong sense of their culture, much of which is reflected in Caribbean foods today.

When the slaves arrived in the West Indies, they continued using foods which they brought, as well as what they could find on land. Carbohydrates like African yams are popularly served as 'food', and white rice is also popular as the base of combination dishes as was practised in the West African diet. Savoury items like okra, gungo peas, red peas, callaloo, meat, bacon or pork are added to the rice.

Other common foods that are rooted in African-American culture include black-eyed peas, benne seeds (sesame), eggplant, sorghum (a grain that produces sweet syrup and different types of flour), watermelon, and peanuts.

Popular foods such as the vegetable okra became an integral part of stews in the West Indies and Southern United States. Okra is the principal ingredient in the popular Creole stew known as gumbo, which is believed to have spiritual and healthful properties.

A major ingredient in cuisine of African origin, okra travelled to the eastern Mediterranean, Arabia and India long before it came to the New World with African slaves. The thickening characteristic of its sticky substance is put to good use in the preparation of gumbos and stews.

1. Sauté onions, celery, garlic and okra in olive oil until onions are clear.

2. Add all seasoning and stir to coat onions, celery and okra.

4. Add tomato juice to cover and cook until celery is tender.

The legacy of African and West Indian culture is evident in the cuisine.As a cooking method, stewing was popular among the slaves, as they could throw bits and pieces of meat, vegetables and whatever else they could find into a pot and leave to simmer. African chefs brought with them unique skills in combining various spices, greens and other vegetables and proteins like meat, fish and seafood for a hybrid cuisine. The slaves brought to the West Indies the popular barbacoa, or barbecue. Other family favourites include brown-stewed chicken, curried chicken, beef stew, stewed peas and rice, rice and peas, greens, sweet potato pudding and roasted breadfruit or yam.

As a cooking method, stewing is a moisture-rich, slow process of cooking a product in its own juice, with the addition of liquids like stock, sauce, juices and beer. This method is ideal for cooking tough meats and vegetables, either simmering in a pot on the stovetop or cooking in a covered casserole in the oven. Moist heat helps to soften tough cuts of lower-grade cuts of meat aided by lower cooking temperatures (about 200F) and for longer cooking times. Meats become tender and juicy with this method.

Closely related are the process of braising and pot-roasting. Lean meats should not be overcooked. Stewing and other moisture-rich cooking methods are recommended for:

Meats with a certain amount of marbling and gelatinous connective tissue provides juicy stews as in cooking cows' and pigs' feet. While prolonged simmering is necessary to soften connective tissue and make tough meat tender, it also dries lean meat out, even though surrounded by liquid. The science associated with the cooking of meat is that as it is heated, the muscles coagulate, proteins shrink and water evaporates, even though it is cooked in liquid.

In a stew, meat is cut into small pieces or cubes and cooked gently in liquid to completely cover it. Eventually, vegetables and ground provisions are added to give the stew character. Seasoning, sauces, and flour may be added during cooking to enhance the flavour or texture of the final product.

There are several types of stews, based on the style of preparation (www.beeflambnz.co.nz).

Known as blanquettesr fricassees, white stews are made with lamb or veal that is blanched, or lightly seared without colouring, and cooked in stock.Blanching means to cover meat with cold water and bring to boil, then drain and refresh under cold running water. The sauce is then made with the liquid and finished with a liaison of egg yolk and cream.

Brown stews are made with pieces of red meat that are first seared or browned. A browned mirepoix (and sometimes browned flour), plus liquids such as stock and wine, is added, and the dish simmered gently until tender.

The liquid may be drained from the cooked meat and thickened by reduction, but stews are more often thickened in one of the following ways:

Coat pieces of meat with flour before browning. The coating contributes to thickening of liquid as the stew cooks.

Use a starch such as corn flour with cold water, which may be stirred into the hot liquid towards the end of cooking.

African stews are very popular nowadays as they offer delectable fare with a blend of exotic seasonings and native foods. When I visited West Africa, I found it hard to resist African Ground Nut Stew.

Cooked rice, as an accompaniment

1. Sauté onions in a large saucepan until translucent.

2. Add chicken pieces and sauté until golden, but not necessarily cooked through.

3. Add coconut milk and stock and bring to a simmer. Once the liquid is simmering, add the peanut butter a spoonful at a time and keep stirring until it is well incorporated. The sauce should be fairly thick, so you may need to add more peanut butter.

5. Season, to taste, with chilli paste/sambal oelek and salt.

6. Serve over rice or other starch (African stiff porridge).

When I tried this dish, I had to eat it the traditional way, the African stiff porridge served on the side and used to dip into the sauce with my hands. Stews are economical and truly enjoyable. Try one today!

Heather Little-White, PhD, is a nutrition and lifestyle consultant in the Corporate Area. Email comments to saturdaylife@gleanerjm.com or fax 922-6223.

A basic beef stew with potatoes, carrots and peas.

One-pot meals, like this beef and mushroom stew, can help adjust portion sizes to a healthier ratio: one-third meat to two-thirds vegetables.