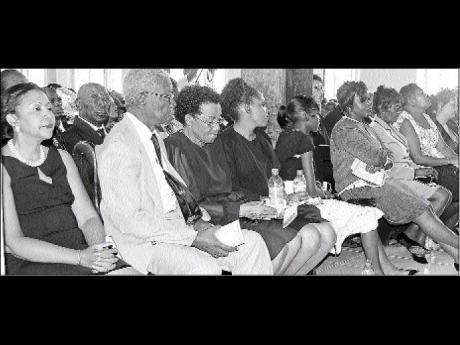 Audrey Barrett (sixth left), widow of Roylan Barrett of Trelawny, among other relatives and friends at the late custos' funeral at the William Knibb Memorial Baptist Church in Falmouth on Thursday. - Photo by Richard Morais

Long-time friend Justice Clarence Walker, in his tribute, said Barrett's public life was a mosaic of service, as he distinguished himself as an attorney-at-law, justice of the peace, family man, historian, developer, businessman and insurance practitioner.

The Reverend Devere Nugent, who deli-vered the sermon, challenged the society to emulate Barrett's legacy of caring for the most vulnerable.

"We must develop a commitment and a regard for the vulnerable by defending them."

"The custos was an exemplar of honour in public service with a legacy worthy of emulation, and a visionary."

Barrett died in Kingston on Friday, January 15 from renal failure days after being hospitalised. He had been ailing for years.