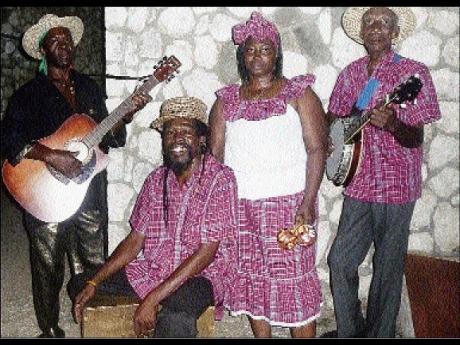 Mento, as an art form, seems to be dying but the Gilzene and The Blue Light Mento Band is working to keep it a vibrant part of the Jamaican culture.

Founder of the band, Lanford Gilzene, said he was taught how to play mento, as a child, by his father. Hence, he wants to pass on that knowledge.

"In the earlier days, you had more people paying attention to mento, but since most of the original mento players passed on, you don't have as many people gravitating to the mento as usual," Trelawny-born Gilzene told The Sunday Gleaner.

"So what I am trying to do is promote mento big time 'cause it's our original music that ska, reggae, dancehall and even dub come from. It would be good if we could get some of the music schools to teach some of the younger kids how to play mento."

This is also the aim of the rhumba box player, Courtney Clarke.

"I try to teach other kids. They always gather around me when I sit down to play. I always give everyone a try. It's beautiful to see them play," said Clarke, who is from Granville, St James.

The band, which was formed in 1986, also includes Donnett Leslie and Wesley Balds. Gilzene recalled that one of their first gigs was at a hotel in Trelawny where they did an audition and were later hired by the hotel manager.

Over time, the group played at various locations on the North Coast, as well as other events such as Harbour Fest, Ocean Spray Fest, Denbigh Agricultural Show and Jamaica Coffee Festival.

Yet, the band's big break did not come until last year when it released its first album, Sweet Sweet Jamaica. Gilzene said he was contacted by Samuel Clayton (now the band's manager), who said he wanted to do some recording with the group. The album was produced by Clayton and Stephen Stewart at Harry J Studios in Kingston.

"We did the album and it was released in France. A couple months after, he told us that we gonna do some promotion," Gilzene told The Sunday Gleaner.

This promotion took them to Europe, including Denmark, where they were the only Jamaican act at the World Music Expo last October.

Gilzene said that apart from the group's interest, his aim is to expose the world to this rare Jamaican art form.

"In some countries, most of the people don't really know mento, but what we are trying to do, while we are touring, is to let people worldwide know what mento is and where it is from," he told The Sunday Gleaner, while noting that the group will be doing shows in Denmark, Britain and France in the coming months.

According to Gilzene, the response to the group is usually favourable.

"People always love us. They always want us to entertain them again and again. We always get a warm welcome from the audience. From they hear mento playing, everybody wants to dance," he said.

The sole female in the group, Leslie, who has been in the band for about 11 years, said everything about mento is infectious.

"Mi like everything 'bout it - the rhumba box, the shaker and the banjo. It just nice," she said, smiling.

Although Balds is 81, he has only been with the band for a year, as he previously played with the Sunshine Mento Band. He said he has been playing this genre of music "from mi a boy" and he loves it.

"That's the reason I'm still doing it. I don't love no other type of music," he laughingly said, with banjo in hand.

Clarke was also part of Sunshine Mento Band but he started playing with Gilzene and the The Blue Light Mento Band about three years ago. However, "I used to play with a lot of groups, about 10. Whenever time they need the best rhumba box they call me," he said.

But his love for the music was not natural, as he said his neighbour used to beg him to practice on the instrument as a child. When he was about 10, he eventually decided to play.

"I love it so much, so I do it very well. I play it on the beach for many years. Whenever I see the crowd, I just stop and play. I still do it sometimes. It's for fun and people love it so much," said Clarke.