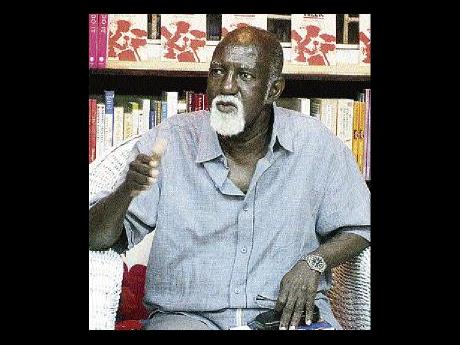 In a Gleaner story carried last October, a day after being conferred with the Order of Merit, Professor Mervyn Morris said, "I hope that literature and the arts will be increasingly noticed for an award of this kind". He dedicated the award to "all the writers before me who I've enjoyed and admired".

In addition to his own poetry, Morris has had extensive involvement in the publications of other writers whose works have brought readers considerable enjoyment. He told The Gleaner that his name is not on the first publication he was involved with in this way, the then Orlando Wong's (now Oku Onoura) Echo.

Morris told The Gleaner that Carl Rattray was minister of justice at the time Wong was in prison. Rattray pursued a reform agenda and prisoners were given the opportunity to nurture their abilities. Through the PEN Club, Wong was allowed to do a reading at the Tom Redcam Library. Morris said it was a huge success and "it became easier to persuade Sangsters to do a book". Echo was published in 1977.

Wong is a pioneer in what became known as dub poetry and Morris also worked with another standout in the genre, Mikey Smith, on his book It a Come. Morris said that "with Mikey, it was more a matter of translating his performance onto the page. While the stuff was very well shaped, if you look at it, he tended to offer you something written down which did not represent on the page at all".

So they worked out a system where Smith would record the poems and Morris would listen, following with a manuscript, which resulted in It A Come.

Morris was familiar with Louise 'Miss Lou' Bennett's verse from his childhood, as "she was one of the persons we read aloud as her poems came in the newspaper and we liked it". He also used Bennett's work when he was teaching at Munro College. Then, in 1963, at the time of the festival competitions, Morris wrote the essay 'On Reading Louise Bennett Seriously'. It was published in four instalments in The Gleaner in June 1964. However, many people are more familiar with the Jamaica Journal publication of the essay in 1967.

Morris edited Bennett-Coverley's Selected Poems, published in 1982. It was decided that her poems would be used in schools and a text was required. However, Morris said, "in the end I did something much bigger. It is suitable for schools, but also suitable for work at a higher level".

And Professor Morris smiles as he remembers the working process where "I would drive up to Miss Lou and when I could get her to focus on the task at hand, after she told me a thousand anecdotes".