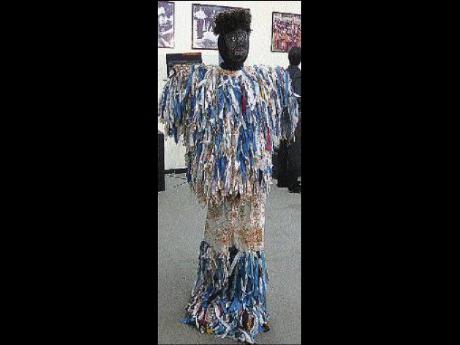 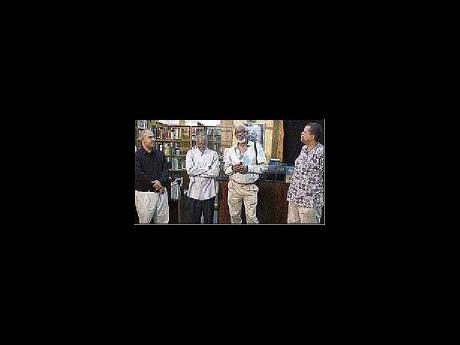 'Pitch Patchy' is in the centre of 'Movements Through The Passage', which was officially opened at the African Caribbean Institute of Jamaica's Ocean Boulevard, Kingston, offices on Monday. - Mel Cooke photo

African Caribbean Institute of Jamaica (ACIJ) director Bernard Jankee made it clear that remounting 'Movements Through the Passage' had not been planned in honour of the late Professor Rex Nettleford. However, speaking at Monday's launch in the ACIJ's Ocean Boulevard, Kingston, offices, Jankee said he could not think of a more fitting tribute to Nettleford, who died last Tuesday in the USA.

Not only was Nettleford, co-founder of the National Dance Theatre Company, synonymous with dance, but Jankee said he was also instrumental in the ACIJ's establishment in 1972. Acknowledging that the exhibition is being remounted, Jankee said "some things never get stale and it is always useful to revisit periodically what we have done before."

Memories of Nettleford permeated the launch, chaired by ACIJ senior research fellow David Brown, as guest speaker Herbie Miller's address was a tribute to the late University of the West Indies vice-chancellor emeritus. Miller read from the chapter 'The Melody of Europe, The Rhythm of Africa' in Nettleford's 1970 book, Mirror Mirror: Identity, Race and Protest in Jamaica.

Speaking specifically to the exhibition, Miller said "both the display of sound and images that make up 'Movements Through The Passage' highlight how music and dance relate to nature, resistance, spirituality, healing and socio-political survival and growth." He also read from Kamau Brathwaite's The Development of Creole Society in Jamaica, who said "music and dance, though recreational, was functional as well. Slaves, as in Africa, danced and sang at work, at play, at worship, from fear, from sorrow, from joy."

Closing his address, Miller said "like the ring game or ring shout, the circle dance or whatever you choose to call it, 'Movement Through The Passage' aims to provide both beauty and knowledge through the medium of music and dance. Open your minds as you interact with it and experience both the wisdom and pleasure it offers."

In opening the exhibition officially, along with Miller, Elombe Mottley also spoke extensively of Nettleford and how a single line from his writing had led to Mottley starting a comprehensive cultural organisation in Barbados which included radio, television, theatre unit and cultural centre.

'Movements Through The Passage' is mounted in a semi-circle, going from 'The African Experience' to 'Wheel And Come Again', incorporating drums, a micro sound system and an audio-visual display, among other items, to go with the text and images. There are pictures of maypole, burru and dancehall movements among other images, and a 'pitchy-patchy' costume is mounted in the middle of the exhibition.

Jankee said all are welcome to see the exhibition and he invited schoolchildren, especially, to visit 'Movements Through The Passage'.