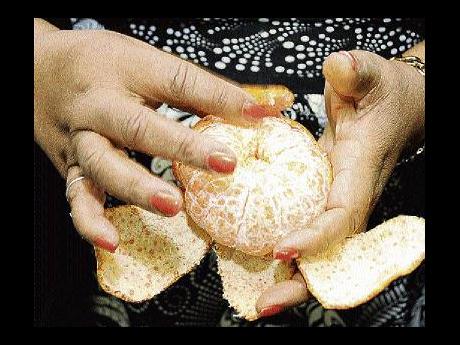 When you peel into a tangerine, the unique aroma from its zesty rind engulfs the nostrils. And when you bite into the rich, orange-coloured segments (called pegs in Jamaica), the delicious juice is sure to awaken your taste buds.

This sweet-tasting fruit is a native of China, where it is known as 'mandarine', a member of the citrus family. This citrus plant, like the others found in Jamaica, was introduced by the Spaniards in the early 16th century. The tree is a small one, with spines mainly on the inner branches. The fruit is smaller than an orange and is slightly flattened at both ends, with a loose skin that is easily peeled without a knife. Usually they are sweet, with a slight tangy flavour. The inner pegs have little, white, protective fibres that are best peeled off before digging into the tasty fruit.

The fruit is in season from late November to February.

Like other fruits, the tangerine can be used in salads, desserts and main dishes. It is also great for making a refreshing drink on a hot day. It is rich in vitamin C and is packed with fibre. Tangerines are a great source of vitamin A and beta cryptoxanthin, which may help reduce the inflammation of arthritis. Tangerines also contain a healthy amount of lutein, which is good for vision.

According to an article on the Colorado Department of Public Health and Environment's website titled, 'Cancer fighting nutrients': "Studies have been performed to determine whether fruit and vegetable consumption reduces the risk of cancer development. The results show strong indications that fruit and vegetable consumption does reduce cancer risk. The nutrients that have been determined most responsible for reducing cancer risk are vitamin A, vitamin C and fibre." As it is, tangerines are rich in Vitamin C and fibre, also it is a great source of vitamin A.

The article, however, pointed out that "while many studies have linked the consumption of foods rich in these nutrients to a reduced risk for cancer, there are few studies in which these nutrients have been given as dietary supplements".

Since tangerines are so tasty and have a number of nutrients, the next time you go shopping, pick up a dozen. They are not so expensive as to burst your budget, and they are good for you. Here are a few varieties that you can check out:

1. Clementine, which is also known as Algerian tangerine, is a small, sweet-tasting and seedless variety. The membranes covering the carpels are thinner than in other tangerines, and its texture is very delicate. Most clementines are imported from North Africa and Spain.

2. Tangelo is a cross between a tangerine and a grapefruit or pomelo (a large citrus fruit that is related to the grapefruit). The name is a combination of tangerine and pomelo. It looks like a large orange, with a distinct, knob-like projection on the stem end. Although they are closer to tangerines than to grapefruits in flavour, tangelos have their own distinct taste.

3. Temple, which is also called a royal mandarin, is a tangor, or a cross between a tangerine and an orange. Temples resemble overgrown tangerines and have many seeds. They are very sweet and juicy and their flavour is similar to that of an orange.