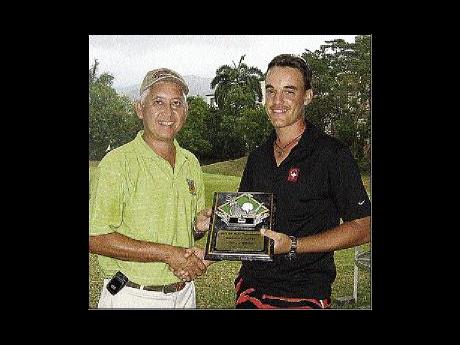 Both son and father ended the two-day tournament which was played on the weekend of February 6 and 7 at the Caymanas Golf Club and the Constant Spring Golf Club on a combined (two-day) score of 149 each. This led to a play-off between the two. Jonathan went on to sink the hole for par while his father ended on one over par to take the title.

Dr Newnham's 75 or 3 over par led the field after day one at the Caymanas Golf Club while Jonathan was just one stroke behind on 76. Day two saw Jonathan shooting 73 at Constant Spring Golf Club on the second day, to his father's 74 for a tied score of 149 each and eventually the play-off.

The tournament was the pen-ultimate qualifier for the Caribbean Amateur Golf Championship's Hoerman Cup which will be held later this year in Barbados.

Fabian Campbell, Robert Chin, Hopeton Marshall & Jodi Barrow are currently leading in the order of merit in the men, seniors, super seniors & ladies categories, respectively. They will be invited to the trials for a place on the team to the CAGC.