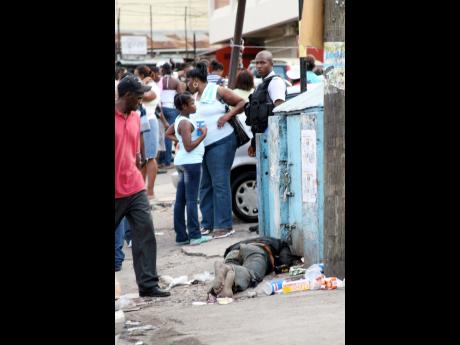 A man of unsound mind lies beside a garbage bin while persons go about their business in May Pen, Clarendon, on Saturday, November 24, 2007. - file

IN 1981, John Hinckley - a mentally ill young man in his 20s - shot US President Ronald Reagan, his press secretary and two security personnel in an assassination attempt. He was arrested, found not guilty by reason of mental illness and sent to a mental hospital where he has remained.

Last year, a young Jamaican of similar age and with alleged mental problems attempted to hijack an airplane. He was found guilty in court and sentenced to 20 years in one of the dirty hellholes that we shamelessly call correctional facilities.

I have been trying from last week Wednesday to expunge from my con-sciousness the sight of a grieving mother on the ground writhing in agony. Her schizophrenic son seemed to have run out of medication and had become boisterous. So she sought the assistance of the police to restrain him and take him for treatment. The end result was that the man was shot and killed in the presence of his mother.

Last week, a policeman was seriously injured by a mentally ill person on Maxfield Avenue and he was later shot by a colleague of the injured cop.

About three decades ago, new drugs were introduced that would make it possible for the mentally ill to be treated as outpatients. Developed countries started a programme of deinstitutionalisation in which some of the mentally ill would be sent back home and be treated from community facilities set up for that purpose. These community services included housing facilities with full or partial supervision, specialised teams responsible for community treatment and early intervention strategies.

Several years ago, Jamaica experimented with the idea of deinstitutionalising mentally ill persons. However, our system did not have any of the planning and safeguards of our rich neighbours to the north. Our mentally ill now find themselves in a revolving door between the streets and prison, with the only foreseeable end to their misery being a policeman's bullet. This is not an area that is likely to be dealt with soon, as it has little political or public resonance. If we are going to import ideas from other countries we can't just copy the parts that suit us. In the United States, public attitude towards people with mental-health problems is broadly sympathetic.

Research shows that nine out of 10 persons in the US believe that society has a responsibility to provide the best care possible for these persons. Not so in Jamaica, where the mentally ill are seen as demon-possessed objects of ridicule who are disowned by family, beaten and stoned by residents and, in more than one instance, shot by the police.

Mayor Desmond McKenzie estimates the homeless in the Corporate Area to be about 250. I believe the number is nearer to 450. So we have ended up with a large army of uninstitutionalised persons, some having severe mental illness. Homeless and criminalised, they present a significant challenge to a variety of service systems in the country. One could be forgiven, therefore, for being slow to give the sobriquet of cynic to those who claim that the administration of the day merely divested itself of the responsibility for the mentally ill while freeing up a valuable piece of real estate. We need to ask ourselves this question: Can we provide comprehensive services for the most severely mentally disabled persons in a community setting? Successful deinstitu-tionalisation involves more than just simply changing the locus of care.

The acid test of a civilised state is how it takes care of the vulnerable in its midst - its children, its elderly and its mentally ill. Armadale provides the answer for the children, and the events of last week are testament of the plight of the mentally ill and their loved ones in this country.

Until a new understanding of the complexities of community-based care for long-term severely mentally ill persons emerges, caring for the homeless mentally ill will remain one of the greatest challenges to public mental health and society in general.