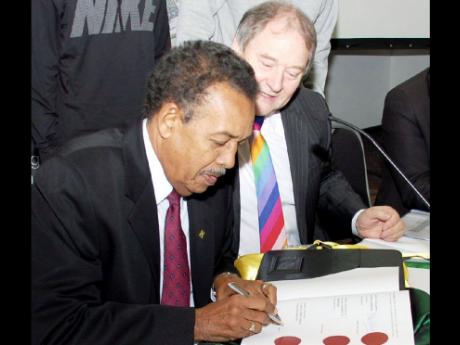 Howard Aris (left), president of the Jamaica Amateur Athletic Association, signs off on a deal for the country's athletes to use the Birmingham University as their training base for the 2012 Olympics, which will be hosted in London. Looking on is Mike Whitby, leader of the Birmingham City Council. - Photo by Poppy Brady

AN OLYMPIC dream has moved a step nearer for Jamaica and Birmingham, as both countries made history by officially signing the deal for Jamaica's track and field team to use the University of Birmingham as their pre-Olympic training base for the 2012 Games.

Both men, along with Professor David Eastwood, vice-chancellor and principal of the University of Birmingham, formally signed the deal during a celebratory event supported by the Jamaica National Building Society at Birmingham's Crowne Plaza hotel.

Lord Morris of Handsworth and Lord Mayor, Councillor Michael Wilkes and his wife, Vivienne, were among the dignitaries present to witness the signing.

"The relationship between our two countries is being enriched by what we are doing today," said Whitby. "Birmingham has a heart that beats like fast Jamaican athletes.

"But more important, we are friends together like one large family and I'm truly delighted that the world's top athletes have chosen to be part of our community here in Birmingham during their stay."

It is that strong bond with its own African-Caribbean population that clinched the deal for Birmingham ahead of cities such as Cardiff, Loughborough, Amsterdam and Berlin.

"Birmingham will be our home from home," said Aris. "It was certainly our best choice and the African-Caribbean people who have lived in Birmingham for generations will make our athletes feel part of that family - this is what sets Birmingham apart."

Aris said he felt the university would provide the athletes with both security and privacy during the crucial pre-Olympic period and he was delighted to learn that the university's kitchens had two Jamaican chefs.

Prof Eastwood said the university "could not be more proud" to welcome the Jamaican team and said the campus would become like a mini Olympic village during the team's stay.

He added: "Since the news broke, there has been a notable buzz on campus."

Birmingham will also play host to the United States track and field team, which underpins the city's credentials as the UK's leading sporting city.

The Jamaican deal is likely to boost Birmingham's economy by £15 million, with the US contract creating a further £9 million.

Significantly, the 2012 Olympic deal coincides with Jamaica's 50th anniversary of Independence - and Birmingham has a thriving Association of Jamaican Nationals group.