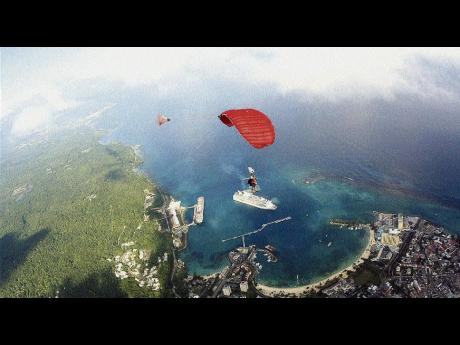 Councillor for the Boscobel division in St Mary, Michael Belnavis, has welcomed the new attraction, Skydive Jamaica, which has opened at Boscobel Aerodrome in the parish.

According to Belnavis, the facility presents an opportunity for job openings for parishioners and for the inflow of much-needed foreign exchange.

"Added to that, it's always good when you have a new attraction, especially in a situation such as this wherein Skydive Jamaica offers something totally new. It's exciting," Belnavis told
The Gleaner
last Wednesday.

The facility has been getting attention as Jamaicans react to the introduction of the hair-raising sport which is quite popular worldwide.

Skydive Jamaica specialises in tandem skydives, which are reputed to be the safest and most popular form of the thrill sport. It also caters to experienced, licensed skydivers.

A typical dive sees a diver jumping out of an airplane at more than 12,500 feet (around 2.3 miles), free-falling for a while before the instructor pulls the cord releasing the parachute, which allows one to glide safely to land.

Belnavis said while Skydive Jamaica might not directly employ a lot of Jamaicans, there will be several persons who will benefit indirectly in areas such as transportation, food and beverage, and art and craft.

Belanvis also welcomed the $300-million upgrading work being carried out at the Boscobel Aerodrome, which will see an expanded runway and other general improvements. This will include a new terminal building and fire truck garage, lighting for the runway and perimeter fencing.

Boscobel is set to be the island's third international airport and will cater mainly to private jets.