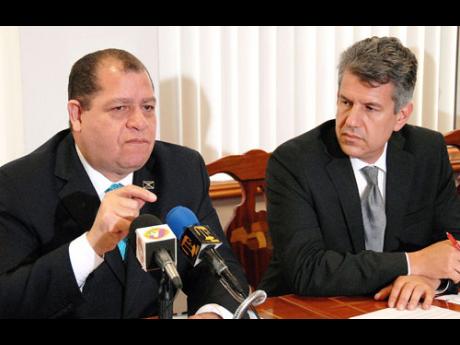 Moody's ratings
agency on Tuesday, acknowledging the smooth execution of the multibillion-dollar debt exchange programme, pronounced that it was upgrading the credit score on Jamaica's sovereign bonds to B3 - the third to do so in the past two weeks - saying its decision was based, in part, on a promise of inflows of cash from multilateral institutions.

At last report, the Jamaica Debt Exchange (JDX) had got 99.2 per cent subscription.

The Ministry of Finance will call the remaining domestic bonds, held by individual small investors, that were not submitted under the programme, announcing Thursday that the principal and interest would be paid on May 16, 2010, at the coupon rates on the bonds.

Bondholders may surrender their instruments to their brokers or directly to the ministry's National Heroes Circle office.

The Inter-American Development Bank (IDB) on Wednesday pronounced that it, too, was impressed with the JDX process, calling it an "exceptional programme" and saying at a press conference in Kingston - held jointly by Finance Minister Audley Shaw and the bank's Executive Vice-president Daniel Zelikow - that it validated Jamaica's reputation of rallying together in a pinch.

"The behaviour of the Jamaica investing public was, in some ways, true to form of what one hears about Jamaica - that when times are bad, Jamaicans pull together," Zelikow said.

The IDB, in a statement earlier in the day, confirmed its US$600 million of assistance to Jamaica, which it labelled as "unprecedented" and, relatively speaking, the largest it has done with any of its borrowing member countries, when measured against economic output or gross domestic product.

Savings from the swap are expected to exceed a gross J$40 billion, or approximately 3.0 per cent of GDP.

Initially, Moody's was wary of the debt recall - as were other ratings agencies - and had pronounced Jamaica in technical default in January when the programme was officially announced.

It now says the exchange was executed with no disruptions to the market, would contain debt-servicing costs over the medium term, and has mitigated liquidity risks in the short term - justifying the rating upgrade.

Moody's B3 grade is not a ringing endorsement of Jamaica's fiscalhealth, but does acknowledge that there is "diminished" risk of debt default. The previous rating was Caa1 on foreign currency debt and Caa2 for local currency.

The agency itself said the debt to GDP ratio of 136 per cent was a demonstration of real vulnerability, and that the likely reactions to pending public-sector reform, including planned spending cuts, remain an unknown.

Its revision of Jamaica's ratings came days behind Standard and Poor's, which also upgraded the country to B- from structural default, or SD. Both agencies have pronounced their outlook on Jamaica as 'stable'.

Fitch earlier revised its rating on February 16 to B, the day the bond exchange transactions were settled.

Moody's said the J$700-billion domestic debt exchange "proceeded in an orderly fashion with a close to 100 per cent participation rate, with no pressure on the currency, and limited repercussions on the local financial system, at least for the time being."

The JDX was a precondition of a standby loan facility from the International Monetary Fund (IMF), which has also taken lead on financing a US$950-million rescue fund for dealers and banks that might be impaired by the debt exchange.

The IMF agreement is expected to trigger, in total, some US$2.4 billion of foreign inflows, apportioned to balance of payments support, the Financial Sector Support Fund, and financing for fiscal programmes and reforms.

Moody's said it would be watching carefully how Jamaica weathers the quarterly IMF tests it must pass to continue receiving assistance over the 27-month agreement.