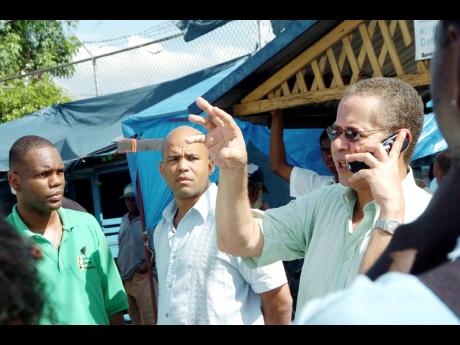 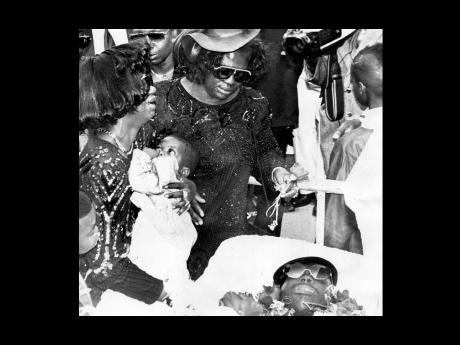 Camille Coke (left) weeps as she stands beside her mother, Beverley, viewing the body of Lester Lloyd Coke alias 'Jim Brown' who was laid to rest in 1992. Brown, the father of Christopher 'Dudus' Coke, was the acclaimed 'don' of West Kingston. Then Opposition Leader Hon Edward Seaga is in the background with then Senator Olivia 'Babsy' Grange just in front of him. 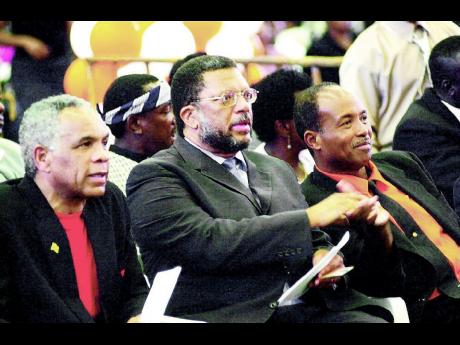 From left, government Members of Parliament Omar Davies, Peter Phillips and Karl Blythe were seen at Willie Haggart's funeral on May 8, 2001. Haggart was a well known 'don' at the time of his death.
1
2
3

Local politicians' defiant flirtations with garrison communities over many years - in the face of dire warnings that this could have grave implications - are coming back to bite the Bruce Golding administration in its ongoing extradition tussle with the United States.

Since last week's release of a damning report by the US State Department chastising the Government for its handling of the extradition request for Christopher 'Dudus' Coke, Jamaicans have applied colourful phrases to capture and describe the predicament in which the Golding administration finds itself.

Many people in or close to the political system have expressed the view that it is a matter of time.

They argue that the political fallout from the nurturing of the garrison culture might have emerged in unexpected ways, but the consequences were always certain.

"The history of garrisons being used at times to protect criminals clearly lies behind the fear and suspicion that people feel," asserted Horace Levy, prominent community-level peace activist.

"It doesn't matter what the prime minister has wrapped up his excuses in, the public is seeing right through it," declared executive director of Jamaicans for Justice, Dr Carolyn Gomes.

"This is a lesson to all politicians that there are no benefits to be derived from hugging up criminals," said former Member of Parliament (MP) Heather Robinson, who walked away from garrison politics in the prime of her career.

"I cannot support what I perceive as a 'don' approach to due process," argued human-rights advocate Yvonne McCalla-Sobers.

"I see the Government's actions in this extradition matter as breaching the separation of powers and implying mistrust of the judiciary."

That Prime Minister Bruce Golding is the parliamentary representative of West Kingston, which includes the Tivoli Gardens community, has not helped.

Coke has been unofficially anointed 'President' of Tivoli Gardens, dubbed the "mother of all garrisons," an uncomplimentary title attributed to the community by former Jamaica Defence Force Chief of Staff Rear Admiral Hardley Lewin.

Adams, a reputed crime fighter and the central figure in the 2001 deadly gunfight with alleged Tivoli Gardens gunmen, has charged that politicians are in a predicament today because of their association over the years with questionable persons who have used millions of dollars of tainted money to finance political parties.

Adams, who maintains that justice must not only be done but must be seen to be done, complains that the security forces have been frustrated in their efforts to quash criminality in garrison communities.

"Politicians have always defended them," the ex-cop declared.

Golding told the House of Representatives last Tuesday that Justice Minister and Attorney General Dorothy Lightbourne had not signed the extradition order against Coke because the surveillance evidence that the US submitted contravened local laws.

The prime minister's insistence that the constitutional rights of every Jamaican must be protected was met with scepticism from many.

Gomes likened Golding to the main character in the story titled
The Emperor's New Clothes
. "I think the politicians are naked. The public expressions and the vox pops are supporting this point," she declared.

The short tale by Hans Christian Andersen is about two weavers who promise an emperor a new suit of clothes invisible to those unfit or incompetent for their positions.

When the emperor parades before his subjects in his new clothes, a child cries out, "But he isn't wearing anything at all!"

Gomes accuses Golding of tricking the nation when he claimed in the 1990s that he had walked away from garrison politics, only to embrace it a few years later when it was convenient.

She likens Golding's pronouncement to a fisherman's declaration that a massive fish was at the bottom of a pond, only to find that it was a minnow.

It is the first time since the Mutual Assistance Treaty was signed in 1992 that an extradition request has generated such a furore.

The extradition foul-up, which dispatched Richard 'Storyteller' Morrison to the United States in 1992 and precipitated a diplomatic tiff between the P.J. Patterson administration and the US, pales in comparison.

Even the extradition request of 1992, which landed Coke's father, Lester Lloyd Coke aka 'Jim Brown', behind bars, was not nearly as controversial.

"The garrison culture is affecting the extradition matter," argued Levy, a member of the Peace Management Initiative.

"There are also implications for the survival of the Government itself, as well as some Government members, if we are to be guided by allegations and rumours circulating about connections and links to Coke."

Adams agreed: "They (politicians) would sign their own death warrants if they were to sign off on some of the proposals made by the police to eradicate garrisons."

Levy argues that Tivoli Gardens is important to the Jamaica Labour Party (JLP) and its leader, with Coke being the reputed head of today's version of the infamous 'Shower Posse'.

"It is widely believed that the Shower Posse is a criminal gang," Levy said. "To the extent that it has validity, people are concerned that the failure of the Government to take action will strengthen criminal gangs in Jamaica."

He warned that the anti-gangs discussions involving Minister of National Security Dwight Nelson and the police will ring very hollow.

However, Levy concedes that in recent years, politicians have attempted to publicly distance themselves from criminals due to public pressure. "But there are still a lot of connections undercover," he asserted.

Adams argues that the Golding administration has not made the situation easier for itself by becoming judge and jury.

The former cop contends that the Government should allow the court to adjudicate on the extradition matter.

"Persons with legal expertise will tell you that there is some evidence illegally garnered that is at times accepted in court - it is just the way it is presented," Adams claimed. "The matter should be left to the courts to decide."

Adams argues that both political parties are guilty of associating with criminal elements in the garrison communities to preserve and protect their so-called popularity. "You will never see the day that the politicians move to dismantle them," he declared.

"When I was kicked out of the system, one politician declared that it was a victory for his party, not the country, but his party," Adams emphasised. "I was made ineffective by the pressure of politicians."

Adams charges that politicians have persons in the garrison system to maintain their power, while on the outside, they use others to sabotage the governance process.

"This is where this country has sunk to," he lamented. "No government will survive because of sabotage and counter-sabotage," he declared.

"If they don't reverse this blueprint, this is just a little bit of what could happen in the future," the outspoken former crime fighter warned.

McCalla-Sobers said her position remains the same no matter who is affected - whether it is a powerful don or a powerful nation, a youth on the corner, or an impoverished community.

"If people are to exercise faith in the authorities, then due process must be observed," she argued. "This is a principle that is probably the most dispensable in garrison-type governments, where the don has no reason to trust the formal systems."

his laws, his interests

McCalla-Sobers contends that the decisions of the don are made according to the interpretation of his laws, are based on his interests, with his decisions being final.

"It may not be too late to have a judge hear this case, weigh the evidence, and decide whether or not to extradite based on the merits of the case.

"My concern is that any action that is less transparent will fuel scepticism and further entrench garrison politics," McCalla-Sobers added.

Robinson, who served as the MP for South Central St Catherine between 1993 and 1995, agrees.

"I believe that every politician at some point must decide how they wish to be remembered. In doing this, they can't simply think about the present, but the past and the future as well," she stressed.

Robinson pointed out that the prime minister, at one point in his life, had some Jamaicans believing that he had turned his back on garrison politics.

"Some Jamaicans were hopeful that with a change in outlook, he had literally asked us to forgive him for the life he once led," she said.

However, Robinson said when the opportunity surfaced for Golding to be elected MP for West Kingston and leader of the JLP, he reneged on the promise he had given to the Jamaican people.

"Bruce Golding must at this point in time tell the Jamaican people whether he had fooled some of Jamaica that he had changed his outlook," asserted Robinson.

"It is a lesson for all politicians not to start what you can't finish, and to remember that there are consequences for their actions."