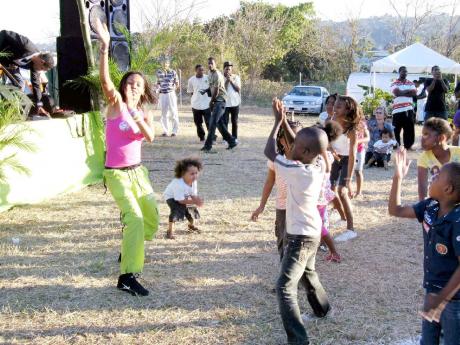 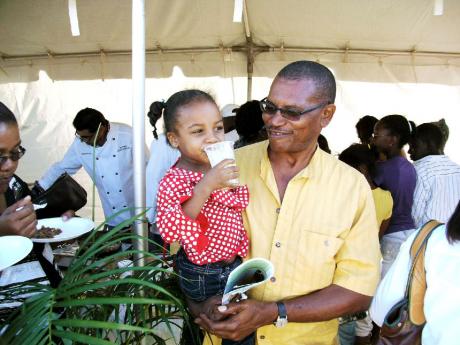 Randolph Robinson with his daughter Rianna, who is enjoying vegetable juice, at JamCen festival in Mandeville on Sunday. - Contributed photos 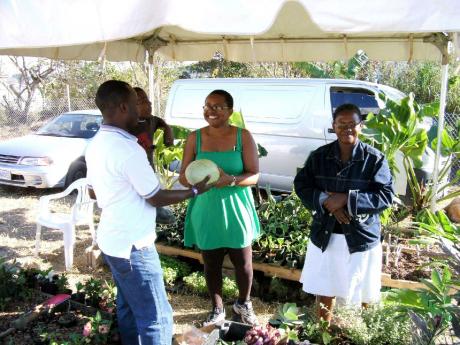 From left: Kenroy Cole with baby, Arlene Clarke and Yvonne Salmon check out the backyard gardening booth at JamCen festival.
1
2
3

Central Jamaica's annual health and wellness festival, JamCen, was held at its usual site, along Brumalia Road in Mandeville, on Sunday, March 7.

She noted that the health and wellness festival was reduced to one day, down from two, and the traditional family day, Sunday, was chosen. Salmon explained that the event got under way from as early as 7 a.m. with yoga under the guidance of a professional instructor. This, she noted, was well supported.

Salmon also said Zumba, which is a type of exercise or dance done to international rhythms, was welcomed for the first time at the event; and was a hit among persons of varying age groups, but especially the younger patrons, under the guidance of a Canadian Zumba specialist and international health and wellness speaker, Sonia Lemoine.

Another attraction this year was was a food demonstration that found favour with especially the children.

"We had children who normally do not like a lot of vegetables drinking them in juice form. There was also live entertainment, including the popular Tesanne Chin.

Salmon promised that next year's staging of the festival will be greater. She explained that the festival, which is planned with the parishes of Manchester, St Elizabeth and Clarendon in mind, could move to Clarendon for its next staging. "We are now making plans to hold the next festival at the Milk River Bath and Spa.

Salmon, who had lavish words of gratitude for her sponsors, explained that the three-year-old festival evolved out of her interest in healthy living. She stressed that there are persons around who are very ill in spite of the fact that Jamaica is ideal for healthy living, especially with the quality natural foods we produce in abundance.