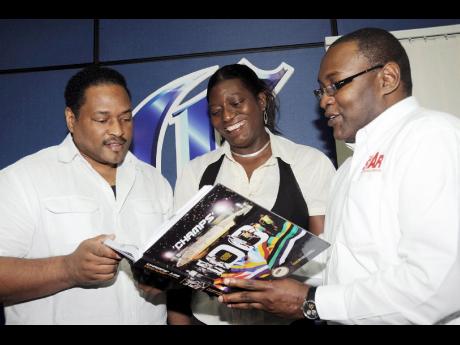 The Gleaner's Editor-in-Chief Garfield Grandison (right) and Managing Editor Jenni Campbell peruse the contents of 'Champs 100' as Michael Grant, CEO of Great House OmniMedia, takes them through the pages. Grant's company documented a century of Jamaican high school track and field. A copy of the book was presented to Grandison at the Gleaner yesterday. - Norman Grindley/Chief Photographer

WHILE JAMAICAN Olympians continue to make strides into the future, the Inter-Secondary Schools Sports Association (ISSA), along with Great House OmniMedia publishing, documented track and field's past in great detail.

Champs 100: A Century of Jamaican High School Athletics 1910-2010 is a compilation of historical ISSA championship events and will be launched on March 22, the eve of Champs' opening ceremony.

"Champs is a cultural touchstone. Everybody has some memory of Champs and most of those moments are captured in here (Champs 100)," said Michael Grant, CEO of Great House OmniMedia.

The coffee table and history book shows the historic journey of Champs and Jamaican culture through sports. For example, readers and historians can track the changes in diversity in terms of race and gender.

ISSA approached Hubert Lawrence, a sports historian and statistician, about putting the book together, and discussions began in mid-2009.

"(The book) wasn't just thrown together," Grant, who edited and did layout for Champs 100, said. "Many persons brought in material and there are never-seen-before photos."

One image that has never been seen before is a portrait taken by Earle Spencer of young Donald Quarrie.

"A researcher of any kind will only have to read this and see Jamaica's success (in track and field)," Grant said.

The historical compilation, Champs 100, will be available after the launch in major book stores and eventually, overseas.