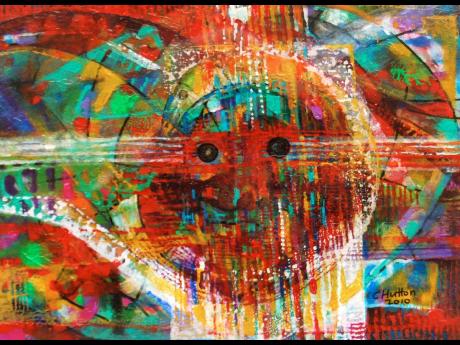 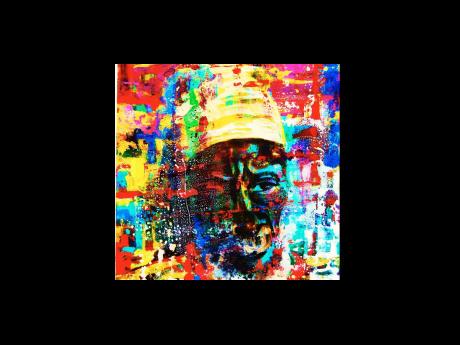 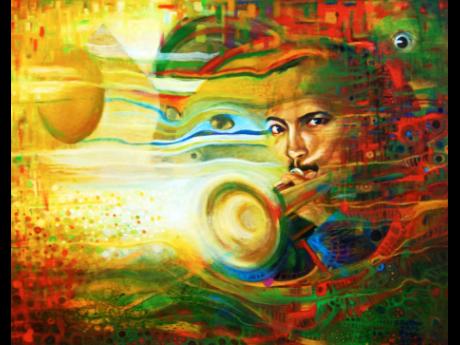 Chronologically, 'Don Cosmic', based on celebrated trombonist Don Drummond, marks the beginning of the series of paintings in Dr Clinton Hutton's 'Repossession' exhibition. He visited the oil-on-canvas work twice, in 2000 and 2009.

Then, as the series (about which Hutton writes "it is precisely this concern, denoted by the question, 'Who am I?', that this series of paintings is about") came to a close, there is 'New World Kalunga: Middle Passage of the Mind', an acrylic-on-paper work done this year.

There are 31 paintings in 'Repossession', which opens 11:30 a.m. today at the Philip Sherlock Centre for the Creative Arts, University of the West Indies (UWI), Mona, and runs until April 1. The guest speaker at today's launch is LeRoy Clarke, master painter and poet/philosopher from Trinidad and Tobago.

Hutton, a lecturer in political philosophy and culture at UWI, Mona, said that in 'Don Cosmic', Drummond's riveting stare "has to do with his inner self/creative spirit and the impact his music had on me as a boy, not yet 10 years old. I still feel that way about Don Drummond's music, that haunting, sad, lonely, joyful sound which I, as a boy, related it to the spirit world stories that I grew up on. The painting is trying to depict the articulation of Drummond's inner self, his obeah, linking it to historical/ancestral metaphysicality and creativity. The robin red breast, for example, is deemed in Jamaican cosmology as the presence of an ancestor. The pyramid represents the pinnacle of a historical benchmark in human evolution, as well as a metaphor for Don's creative cosmic musical climb. The fish denotes Riva Muma, Oshun, etc. (which is) ancestral god of fresh water. The egg is a symbol of uncertainty and, in an aesthetic sense, a muse of spontaneity".

Chronologically, Hutton had also been in single digits, six years old, when he started painting. Drawing came earlier, at about the same time he started attending basic school at three years old. The spark came from his mother, who would draw her embroidery designs on brown paper before doing the intricate needlework on sheets, pillowcases, skirts, blouses, table spreads, place mats and the pockets of some of the shirts Hutton wore to basic school.

He made his first paint brush by attaching hair from the tail of his pet goat, Betty, to a stick with cord. And the colours were also improvised - yellow from the turmeric, green squeezed from the leaf of the kwaku bush or the leaf-of-life, red from the seed of the annatto, brown from wet earth, purple boiled from the heart of the logwood and a reddish purple brown, boiled from the bark of two trees his mother used to boil dye for the board floor of her house.

In 'Repossession', acrylic-on-paper works constitute the largest number and there are also acrylic on canvas, acrylic and gouche on paper, oil on canvas and water colour and acrylic on paper paintings. Also in the exhibition are 'River Muma', which Hutton worked on in 1993 and 2010, 'Emanuel Liveth (Everytime) and 'Mbumba (Nzambi Mpungu) Patron God of the Haitian Revolution'.

The Sunday Gleaner asked Hutton if art could help in the rebuilding process in Haiti, after January's earthquake, and he not only said yes, but pointed out that "art, in its spiritual sense, was at play after the quake hit - the songs and movements were performed everywhere, to ease the pain, the hurt, the shock". He also pointed out that "some Christian missionaries who have gone to Haiti to administer aid have been pressing quake victims to give up voodoo or they will take their aid and go home".

Hutton has done more than 20 solo and group painting exhibitions and is also a noted still photographer. He was an awardee in the CARICOM-recognised Caribbean Development for the Arts, Sports and Culture Foundation Caribbean Hall of Fame Awards for Excellence, 2009, recognising his outstanding contribution and achievement in the field of visual arts.