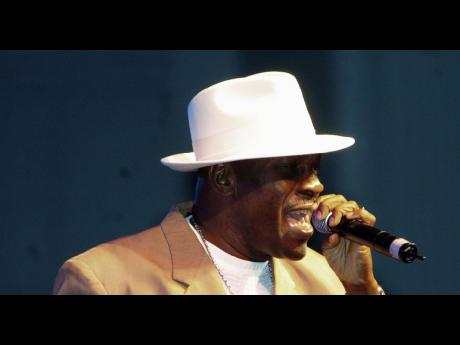 Forty Leg, which demands, "stop spread propaganda pon di dread/cause di dread no have no forty leg inna him head" is one of those rare songs which captures the wider issues encapsulated in a single, striking incident in a danceable way, the song outliving the event which sparked it and remaining relevant years after it was recorded in 1977.

As the wave of Rastafari rose in the turbulent 1970s, there were mutterings about the hygiene of dreadlocks, the 'forty leg' allegedly found in one man's hair spreading far and wide, the song noting, "you go the east them a say so, you go to the west them a say so".

It also marks a transition point in the musical career of the man who has probably been the most successful at a dual singer/deejay personality, George Nooks, who got the deejay name Prince Mohammed out of that late evening session at Joe Gibbs' studio on Retirement Crescent in Kingston.

Forty Leg came out on a Disco 45 with Culture's Zion Gates, Nooks having gained the all-important dancehall acceptance previously. Nooks said he had done it at a dance in Pembroke Hall with Tipper Tone sound system. The people would have been familiar with the story it was based on, as Nooks said, "it was a big news. About two or three dance we go we draw it and it get forward".

More lyrics were added on spot in the studio session a few weeks after Forty Leg hit the dancehall spot, Nooks saying that "back then we never really write nothing. Them just give you a rhythm and you do something". He was called in to record when Zion Gates was being mixed, as "they figured it was the right time and the right song". He said that Gibbs had taken him under his wing, after they met through DJ Trinity.

The stamper was cut right away and the record was out two days after the recording session. Before it came out, though, there was a name change which affected Nooks negatively at first. He was handed a Disco 45 of Zion Gates/Forty Leg by someone who was involved in the pressing of the record and, instead of George Nooks, he saw Prince Mohammed. Upset, he went to engineer Errol Thompson. "He said is alright. That is your deejay name, different from the singer," Nooks told The Sunday Gleaner.

He thinks the name was given to him by Thompson and Gibbs in an era when there were many 'Prince' deejays, such as Prince Far I and Prince Allah, and went on to do a deejay album for them, which included the Money in My Pocket and How Could I Live combinations with Dennis Brown and the Someone Loves You Honey collaboration with JC Lodge.

At that time, Nooks said, Disco 45s were not included on chart listings, so although the Zion Gates/Forty Leg combination was very popular, that was never reflected on an official chart. In concert, the proof was in a Christmas show at Carib Theatre, when Joseph 'Culture' Hill called him on during his show-closing set. Prince Mohammed had not been billed to perform and, as it was the end of the show, people were leaving and the doors were open.

When he started Forty Leg, not only did people turn back, Nooks said, but also people who had been outside Carib ran in to see him onstage.

These days in his performances, Nooks uses his dual musical personae, employing his singing and deejay skills to perform both sides of that 1977 Disco 45, delivering first Zion Gates and then Forty Leg to good effect.