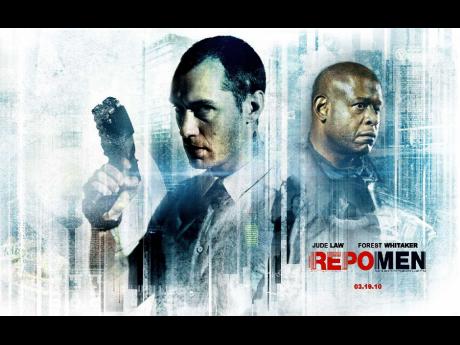 In the happy future of Repo Men, if you need a pancreas, you can get a pancreas. It'll cost you $618,000 and, if you miss one of your scheduled 'easy' payments, you'll find yourself hounded by a hired goon who will slice you open, retrieve the organ and leave you on the floor, bleeding to death.

But at least you enjoyed a little extra time with your loved ones, right?

With any luck, that time would not be spent watching empty-headed thrillers like Repo Men, a trashy movie that offers its slick dystopian vision as a pretense to lacerate a few dozen bodies in a fashion that makes Nip/Tuck look like Marcus Welby, MD.

The movie's opening sequence establishes the mood, with Jude Law's repo thug interrupting a deadbeat organ recipient mid-call-girl (the movie's view of women is almost as dim as its attitude toward the future), tasering the poor bloke and then cheerily yanking out his liver while listening to Rosemary Clooney. (The film does display good taste in music.)

A change of heart

Law's Remy often works in tandem with Jake (Forest Whitaker). They're good at what they do, though their corporate master (Liev Schreiber, making a nice career playing amoral types) wishes they'd come in through the back door with their organ retrievals.

"I want them buying, not thinking," Schreiber's salesman says, referring to the customers deliberating in his 'showroom'.

Remy's wife (Carice van Houten, Black Book) wants him to find a new line of work. Apparently, she does not like his job's hours, though she doesn't seem to have a problem with the butchering aspect. (She must use a good laundry detergent.)

As luck would have it, though, the hunter becomes the hunted when an on-the-job accident forces Remy to have a literal change of heart about his profession. Immediately, preposterously, Remy acquires a conscience along with a new gal pal (Alice Braga), who, like Remy, is on the run after having enough transplants to qualify for bionic woman status.

Understandably, Repo Men has been sitting on Universal's shelf for years, and what meagre social satire it contains has long passed its expiration date. (The equally bad Repo!: The Genetic Opera mined the same territory last year.)

As an action thriller, it's not much either, full of tedious nonsense and unintentionally comic moments involving Jude Law, action hero. (Unless director Miguel Sapochnik meant that to be part of the social satire, too, and we're just not getting the joke.)

And, without going into too much detail, the movie's loopy ending takes the material's logic-be-damned ethos into another stratosphere. But it does confirm the filmmakers' grisly fascination with invasive surgery. Maybe they could set up some kind of eyeball-removal service booth outside theatres showing their film.