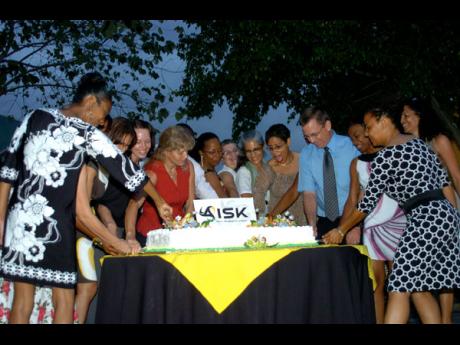 Teachers of the American International School of Kingston cutting cake at the official dedication and unveiling ceremony of the institution. - Winston Sill/Freelance Photographer

This seemingly utopian school infrastructure is not located in some industrial First-World country, but in the southern Jamaica parish of St Andrew.

The American International School of Kingston (AISK) recently launched its new College Green campuses, signalling what can be done for educational facilities in Jamaica.

The launch, which was held last Thursday at the new campuses, brought together 15 years of hard work and determination which culminated in an enhanced environment for the students.

Chairman of the board, Peter Melhado, said the school aims to become a template for high-quality education in Jamaica. He also believes the school, which mainly serves high-income families, makes Jamaica more attractive for investment.

"A high-quality international school makes Jamaica competitive with other countries by attracting companies considering doing business in Jamaica, as well as offering Jamaican students an opportunity to participate in a cosmopolitan environment," he said.

AISK director Sean Goudie said the new facilities were a major improvement on what existed 15 years ago. The school's first site catered to 30 students in a converted residence, with bedrooms serving as classrooms.

Now, the school, which caters to children of preschool to high-school age, has 270 students from 32 nationalities.

"We have also implemented the International Baccalaureate Diploma programme, which is perhaps the fastest-growing curriculum among secondary schools the world over," Goudie said.

Education Minister Andrew Holness, in his remarks, said the rest of the education fraternity, including the Government, should strive to build facilities of similar standard to AISK's.

"If a group of motivated Jamaicans and our friends from overseas can band together to accomplish this great thing, then so, too, must the people of Jamaica and the Government of Jamaica come together to do the same thing for public education," said Holness.

Holness added that the Government was moving to implement an education trust to attract funding for school initiatives across the island.

"Part of the Government's plan for education is that we must encourage more international schools to come to Jamaica to offer education from Jamaica. Indeed, we consider education to be an export industry for Jamaica," he said.

Despite achieving this feat, AISK is planning another expansion phase, which will include an art studio and a 300-seat performing arts auditorium.