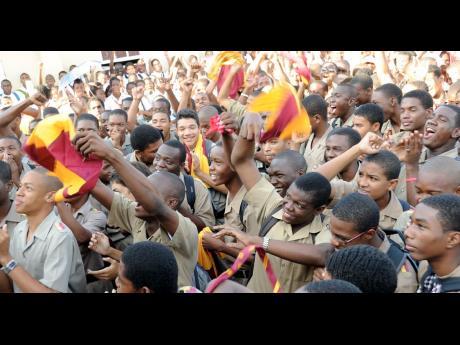 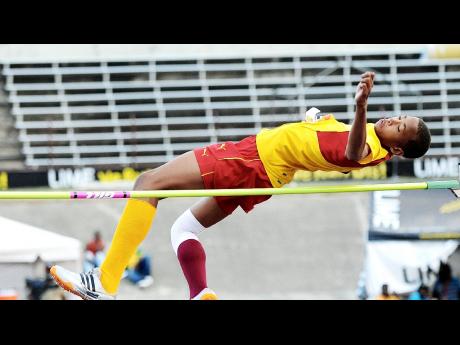 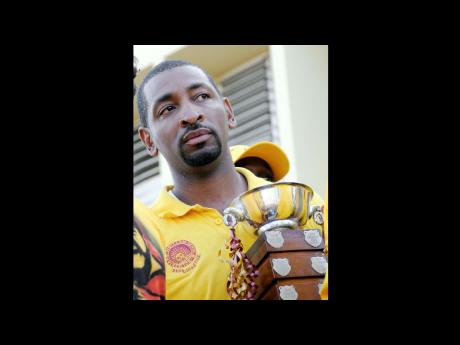 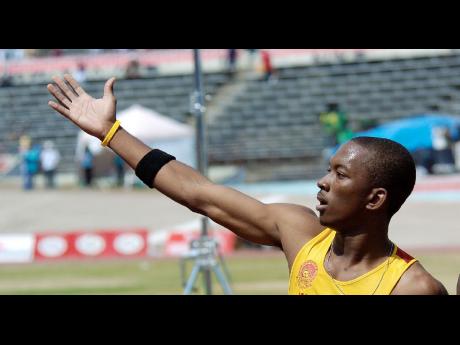 Dwayne Extol of Wolmer's Boys getting the crowd in the action after winning the Class One boys' 400 metres final at the National Stadium last Saturday. Extol clocked 47.43 seconds. 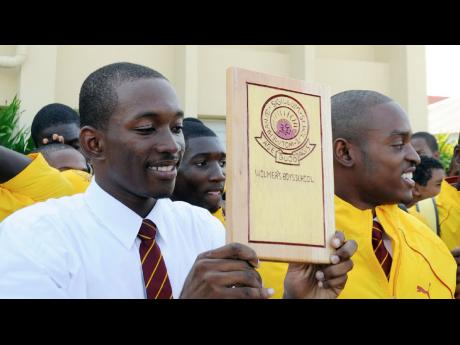 Dwayne Extol (left) and Kamal Fuller with the Jesse Owens Fair Play Award at a ceremony on Monday to celebrate the Wolmer's Boys School's victory at the ISSA/GraceKennedy Boys and Girls' Championships. 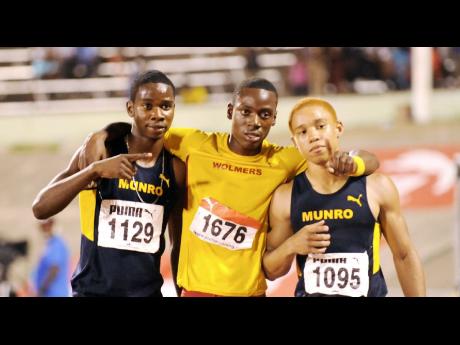 Odean Skeen (centre) of Wolmer's Boys posing with the Munro College pair of Delano Williams (left) and Adam Cummings after he won the Class Two 100 metres final at the National Stadium. Sheen clocked 10.46 seconds to finish ahead of Williams (10.60) and Cummings 10.66. 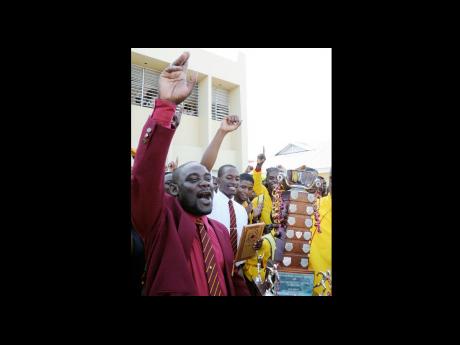 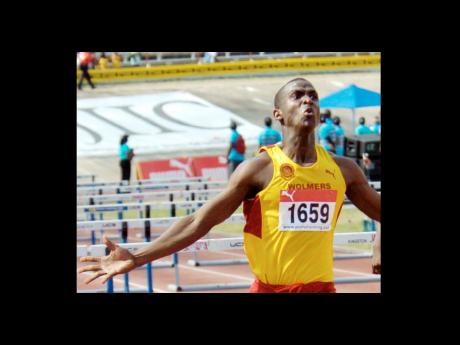 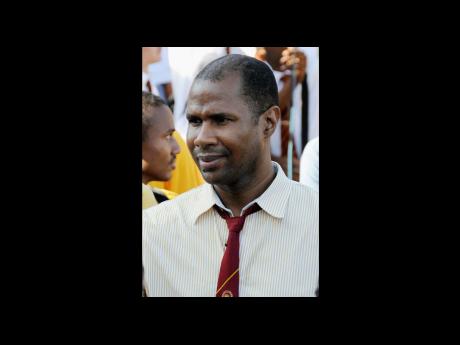 President of the MVP Track Club and Wolmer's old boy, Bruce James, joins in the ceremony to celebrate his school's victory at the 2010 ISSA/GraceKennedy Boys and Girls' Championships.
1
2
3
4
5
6
7
8
9

Thirty-five, 12 and 54. Remember those numbers. They are very important to the Wolmer's faithful who saw their school triumph at the recent ISSA/GraceKennedy Boys and Girls' Championships at the National Stadium where they outscored Calabar High and Kingston College; who ended second and third, respectively.

The win was accomplished with a mere 35 athletes (one-third of the complement used by their rivals), it was their 12th lien on the coveted trophy and their first since 1956; 54 years ago when, just like it was last week, they outlasted Calabar and Kingston College for the top prize.

According to coach David Riley, the victory was the result of years of detailed planning and strong belief in their philosophies.

"It's really a five-year plan and we have been working on a parti-cular strategy which was primarily to just build from the base. If you think of a bucket that you are trying to fill, it will always overflow, so the people who rise to the top will always leave, so how do you replace them?" reasoned Riley. "Instead of using the model that other teams were using, which was to just bring people in at Class Two and Class One and you have them for a year or so, we decided to get them to come in at the first-form level and carry them all the way through the programme."

However, it has not been an easy road for the Wolmer's track team leadership, with one of the major challenges coming from within their Heroes' Circle walls. With a high number of the athletes actively involved in other sports, Riley and the entire Wolmer's technical team had to find a way to get their athletes to focus on athletics.

For instance, team captain Dwayne Extol was also a leading player for the basketball team, while the Under-16 football team consisted of no fewer than eight track team members in the starting XI; and that's just the beginning.

Said Riley, "In September when we looked at the number of persons who should have been training in tracks and were involved in the football programme and other programmes, we had about 27 of the boys who were involved in this. We sat down with the physical education department and we worked out a plan. It's something that we have to struggle with every year at Wolmer's."

Julian Forte, the Class Two double sprint champion, is one such person who has benefited from a switch in focus. Forte got dropped from the team in his first year, before returning two years later to barely make the 4x100m relay team. There was an improvement for the youngster that year as he won the long jump event in his class. Forte, who also played football for his school, decided to focus entirely on track this year and the results were witnessed by all at Champs.

"That's one of the major problems at Wolmer's, kids who come in are mainly from the prep school who tend to do a lot of different sports, and they come to high school with the same mentality, so getting them to focus on track and field is a challenge," Riley added. "We managed to do that a lot more this year and that's largely why the performances have been so impressive."

The coach also made special mention of the school's high standards and their refusal to conform to the conventions where local high school track and field programmes are concerned.

Riley, like his colleagues at Wolmer's, believes strongly in quality over quantity, with this being the primary reason behind their decision to use only 35 athletes at Champs. He explained that they have set very high standards for themselves and that he was confident of the sustained success of his team, once this model is continued.

"What we are doing at Wolmer's is solid and it's such that, if we continue at it, Wolmer's will always be a force to reckon with in local track and field," Riley said.

"We have standards for each event that athletes must achieve if they are to make the team, and those standards are much higher than those of ISSA. So one can actually make an 'A' standard for Champs and still not make the Wolmer's team. We don't intend to take someone to Champs just to run the heats," Riley shared. "We had a smaller team than everyone else because we only took people who we knew could make the top eight in each event; that is the Wolmer's way and this is how we will continue to run our programme. We will not follow everyone else, we will continue to do things our way."

Wolmer's won Champs with the last event, the 4x400m open relay, after entering the event tied on points with 2008 winners Calabar.

They managed to finish second in the event to end the championships on 208.5 points ahead of Calabar, who finished the event in seventh place for a final points tally of 201.5 points.