Free for Easter - Food For The Poor spends more than $500,000 to set prisoners free 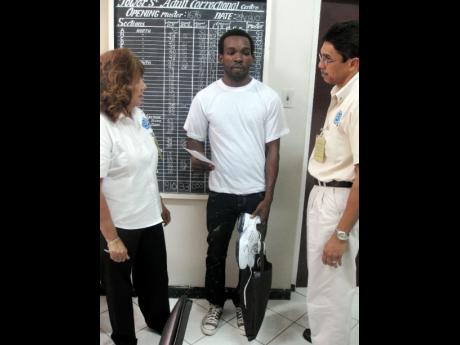 Damion Thompson (centre), inmate of the Tower Street prison, is being briefed by Sandra Ramsay (left), director of the prison ministry, Food For The Poor, and Ryan Peralto, CEO of Food For The Poor, on the details of his release. - Photos by Mel Cooke 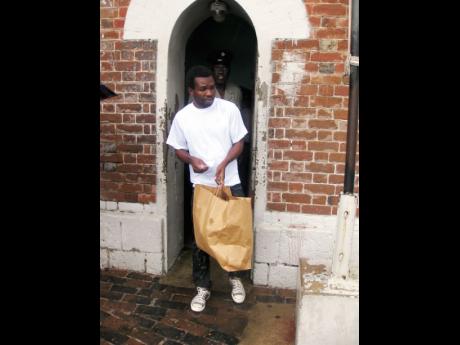 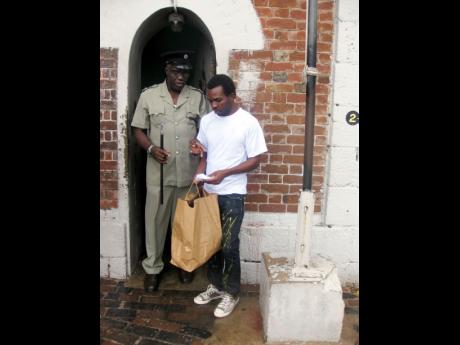 Superintendent A. Leroy Fairweather instructs Damion Thompson on proper storage and care of his release papers while cautioning him never to return to the facility.
1
2
3

THE TOWER Street Adult Correctional Centre, Kingston, is a very busy place at mid-morning last Wednesday. It is visiting day and in the parking lot are grim faces, bearing packages designed to bring cheer to someone on the other side of the towering, forbidding red brick wall.

Beyond the thick metal gate for pedestrian traffic in and out of the prison there is an orderly buzz.

Gloved staff members are searching parcels and a guard with an automatic rifle stands at the ready, posture relaxed but eyes alert.

He is the sole person being released this Easter from Tower Street under the Food For The Poor's (FFP) Prison Ministry programme, where the remaining balance for persons sentenced to 'fine or confine' is settled and they are released.

Fifteen persons were released earlier from the St Catherine District Prison under the FFP programme which kicks into gear at Easter and Christmas.

Director of the FFP's Prison Ministry, Sandra Ramsay, told The Sunday Gleaner that the total expenditure on fines for this batch of releases was $550,893.35. Thompson's remaining fine is $64,672, after he was sentenced to $80,000 or 18 months in the Black River Circuit Court in December for causing "grievous bodily harm with intent".

The prisoner, release programme has been running for 27 years, and Ryan Peralto, FFP chief executive officer, refers to the Bible verse about setting the captives free - a scripture passage which Bob Marley utilised in his song Exodus.

He pointed out that FFP not only pays the prisoner's fine but also gives them a package, including footwear and toiletries on release. Then a few days afterwards there is a follow-up interview, determining what they wish to do to be productive and reintegrate themselves into the society, and further assistance is provided.

Winston Anderson, 'Superintendent B', who is second in command at Tower Street, has seen many prisoners released under the FFP programme.

He said he could remember when the money was paid for some prisoners and they were told they were being released, "they did not believe they were free to go. It was like a dream".

Anderson says most persons who are called in to be told they are being freed think that they are about to face disciplinary action.

Those to be released are selected by the prison staff. They cannot have a mandatory prison term as part of their sentence and Anderson says attitude and behaviour are critical. "We are not going to send anybody who is making problems, you have to be behind him to go into rehab programmes."

In addition, the prisoner would have been expected to show remorse and a change of heart.

Still, Anderson pointed out that there were those prisoners who would insist they were innocent, who knew their case inside out and stuck to the details a thousand times over.

"You look and you say something went wrong," he said, and here the objective is to try to get them to let go of the bitterness".

Thompson, like all the prisoners released under the FFP programme, would have been told to take everything from his cell and his personal effects would have been handed to him as he signed for them. Returning to the cell would be optional.

"If he wants to go back in it's up to him," Anderson said, and The Sunday Gleaner gets the distinct impression that he is speaking not only about going back to say goodbye, but returning for another sentence.

HE STANDS in the superintendent's office, in the presence of strangers as well as prison-management personnel, his fingers playing out his otherwise concealed tension on the yellow splashed, deep blue denim of his jeans.

His hair is bushy, his eyes watchful, and although he is a not very tall, his strong shoulder muscles are evident under his white T-Shirt.

Thompson has some questions to answer, which he simply cannot. The queries come thick and fast from Superintendents Leroy Fairweather and Winston Anderson. "Why are you here this morning?" "You in a fight, me son?" "They find you with ganja?" And the answers came right back in a calm tone. "I don't know." "No." "No."

"Them say is you flatten out a man with a brick," Anderson says, frowning at a document in his hand. Again there is a denial without agitation.

Then there is a question that Thompson can answer positively, Anderson asking when he is scheduled to be released. "The 16th of December," Thompson replies.

"You have nine months," Fairweather remarks. They ask Thompson what he used to do and he replies "barbering". "But you don't trim your hair," one remarks, and for the first time Thompson smiles.

There are more questions - which school he went to, where he is going to stay when he gets out in December, who has come to visit him (his sister Shauna), how his time in prison has been ("Rough!"), how he has found the food ("a the bread alone me eat") and his relationship with his cellmates. He has got some tough treatment as they "say me deh pon short sentence an dem deh ya long time".

Thompson is shaking his legs now, but otherwise still. A Food For The Poor representative enters the room with a large bag and Thompson eyes it, then turns his attention back to the group of persons he is standing to the side and behind of.

The legs are still, but the fingers are beating their tattoo of tension again.

"Suppose them let you out early, like in July?" Anderson asks. "Then me woulda feel good, you know, sir," Thompson says. "What would be the first thing you do?" "Go to my mother and hug her up."

Finally, the wait is over. Fairweather says, "These people come to tell you something, I don't know where they get your name from". And Ryan Peralto tells Damion Thompson that he will be released from prison. "Your fine will be paid and you will be able to go home today," Peralto says.

Thompson does not smile. His lips are pursed, his hands are now still and his voice low as he says "Yes sir, Yes sir". He smiles broadly, takes in a deep breath and lets it out.

There are words of caution and advice - ("You are supposed to be a trailblazer") - the care package is handed over and there is a moment of laughter when the new shoes are matched against the ones on his feet, which are significantly smaller.

With the formalities of release observed, after three months in prison Damion Thompson is a free man.