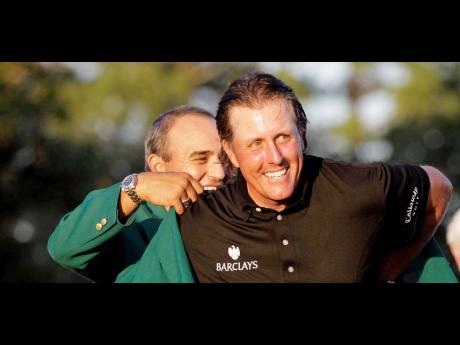 Phil Mickelson won his third Masters title, shooting a 5-under 67 yesterday to pull away for a three-stroke win over England's Lee Westwood.

Already a fan favourite and now the sentimental pick with his wife and mother battling breast cancer, Mickelson rolled in a 15-foot birdie putt at the signature 12th hole. He then managed a stunning shot off the pine straw and around a tree to set up another birdie at the next hole. Mickelson wrapped it up with yet another birdie at the 18th, then headed to the side of the green to hug wife Amy.

"To win this tournament, it's the most amazing feeling," Mickelson said from Butler Cabin. "This has been a special day. I'll look back on this day as very memorable, something I'll always cherish."

Westwood, Mickelson's playing partner in the final group, led for 54-holes. He was third in the last two majors, the British Open and PGA Championship.

"Phil, being the champ he is, just hit some great shots down the stretch," Westwood said. "He's been through hard times recently. He deserves a break or two."

Anthony Kim finished with a 7-under 65 that sent him to the clubhouse clinging to the hope that Mickelson would falter, but Lefty wasn't going to throw this lead away.

Tiger Woods was among the contenders who faded away, struggling all day with a shaky swing off the tee and never made a serious push for the lead. He finished with a 3-under 69 and 11-under 277, tied with South Korea's K.J. Choi for fourth.

"That's not what I wanted," said Woods, playing for the first time in five months since a sex scandal severely damaged his reputation. "I wanted to win this tournament. As the week went along, I kept hitting the ball worse. It was not very good."