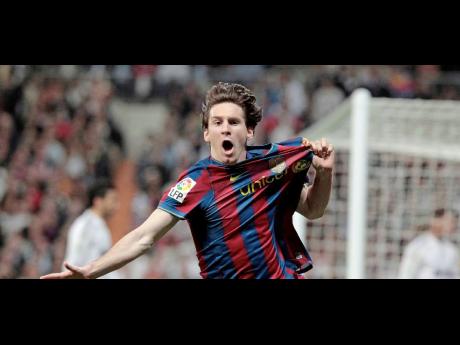 Victory over another top club has Lionel Messi believing Barcelona are unbeatable in their current form.

Barcelona's 2-0 victory over Real Madrid at the Santiago Bernabeu stadium last Saturday gave the defending champions control of the Spanish league race and prompted the Argentina international to say Barcelona are making "history".

"Once again the team showed today we are superior to anybody else when we want to be," said Messi, who scored his 40th goal. "You always have to prove it on the field and today we did that."

Although the Catalans' lead is only three points with seven games to play, Barcelona hold the head-to-head edge should the teams finish on equal points.

Barcelona also dealt Madrid a psychological blow by recording back-to-back wins at the Bernabeu for the first time in the club's 111-year history while scoring a record fourth straight win over their closest rival.

"We can keep making history," Messi said. "It was a very important triumph, but we have to continue on. I don't mean to say that with only words we win. You have to try to win every game and that's what we try to do, always."

The Spanish press seemed to agree with Messi, the World Player of the Year, on Sunday with El Periodico newspaper calling the European champions "unstoppable".

La Vanguardia took a poke at Barcelona's Spanish capital rival with 'What a pleasure it is to play with you, Madrid'.

El Pais was more to the point: "Barca's football is not open to discussion."

Barcelona opted for a tactical game until Messi's 33rd-minute opening goal when they went on take control as they seem to with every game against their toughest opponents.

Barcelona have beaten the best clubs from England, Italy, Argentina and Germany since coach Pep Guardiola took over before the start of the last season.

Guardiola, who is the first coach to lead a team to six major trophies in a campaign, says there aren't any secrets to his side's success.

"A lot of work, a lot of hours and they're all good players," Guardiola said. "When they don't run, I get on them and since they don't like that, they run more."

While the European champions set their sights on beating Inter Milan in the Champions League semi-finals so they can play in the final at the Bernabeu, high-spending Madrid seem to be heading for a second straight season without a trophy.

Ronaldo, who has 25 goals overall while Messi leads the league with 27, said there's still hope for the Spanish capital's team.

"It's not a disaster to lose against Barca. I don't think they were so much more superior than us," the Portugal forward said. "We're professionals and you cannot give up. We can win the league."