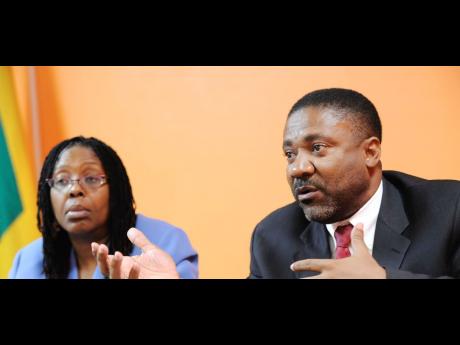 Angella Brown Burke (left), vice-president of the People's National Party, and Phillip Paulwell, member of parliament and chairman of Region Three, speak to the press during the announcement of their 'Making Our Communities Safer, 2010 Project' at the party's headquarters yesterday. - Ricardo Makyn/Staff Photographer

President of the People's National Party (PNP), Portia Simpson Miller, and Minister of National Security Dwight Nelson will spearhead the launch of a peace initiative in six affiliate communities within the PNP's Region Three next Sunday.

Chairman of Region Three, Phillip Paulwell, told journalists at a press briefing yesterday that the initiative is dubbed 'Making Our Communities Safer, 2010 Project'.

The ceremony is scheduled to start at 10 a.m. at the Mico auditorium on Marescaux Road in St Andrew.

Paulwell said, despite the project's name, plans had been put in place to ensure that the project continued beyond 2010.

An earlier version of the project had started in 2004 but fizzled.

The Region Three chairman said the rebranded initiative contained a 'Community Charter and Livity Code', which would be unveiled at Sunday's launch.

It underscores the importance of respect, good manners and courtesy towards others; protection of community property, schools and churches, among other facilities; the need to respect women and safe sex.

"We intend to see a reduction in serious crimes and a spike in harmonious relationships," Paulwell declared.

He said the measures to determine levels of success were being put in place.

The member of parliament for the strong East Kingston and Port Royal seat since 1993, Paulwell stressed that the initiative was not intended to garner any political capital for the PNP.

"Although the initiative will start in-house, among our party members, it is our intention to enter into dialogue with representatives of other organisations, including the Jamaica Labour Party, to seek possible areas of cooperation and support."

He said, however, that the attention would initially be placed on areas in which the PNP had very high levels of influence.

PNP vice-president with responsibility for Region Three, Angella Brown Burke, said some individuals would be targeted to help foster peace when the programme got off the ground.

"We will deal with persons of influence in most communities in which the PNP does not enjoy overwhelming support," she said.