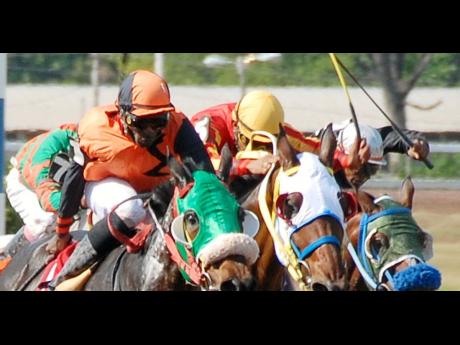 Dustrock (left) storms through under champion jockey Omar Walker to win the fifth race over 1200 metres for the Roderick 'Pilot' Francis Memorial Cup at Caymanas Park on Wednesday. She was a 6-5 favourite. - Colin Hamilton/Freelance Photographer

With the horses for the most part running true to form at Caymanas Park on Wednesday, both the Pick-9 and Super-6 were caught and start anew tomorrow.

All nine races on the card will encompass the Pick-9, while the Super-6 will be conducted from race four to nine. We look at the Super-6 which gets under way with a restricted allowance race for five-year-olds and up over the straight five course (non-winners of three other than) to be contested by 10 starters.

Included in the line-up are the very fit pair of LIL 'TIGER and BIG BARGAIN, along with ALIAS MR CAT, THE DIVINE KING (regaining form), MEDUSA and the sparingly raced FLAGAMAN, who returns from a 15-month absence to contest this race.

LIL 'TIGER, who was narrowly beaten by the outsider PRINCESS CUT over 1200 metres on March 27, will have lots of supporters from the convenient mark of 52.0kg and apprentice Doushane Gordon again in the saddle. But the Anthony Nunes-trained FLAGAMAN won in much better company prior to the break and having been extensively prepared for this race, gets the nod with only 52.0kg and former champion Shane Ellis aboard.

The fifth race, again over 1100 metres (claiming $350,000-$300,000) should see RIGMAROLE, DANIELLE MY GIRL, LADY WALES, LIGHT MY FIRE and recent winner BULLET TRAIN in contention where it matters in the 11-strong field.

Bearing in mind the distance, it will more than likely come down to LADY WALES and DANIELLE MY GIRL, both of whom will report in good nick. LADY WALES is preferred, but only just.

The stretch-running PRINCE ROHAN, to be ridden by in-form apprentice Aaron Chatrie for Nunes, gets the nod over old rival OVATION and TITANIUM KING in the sixth race over 1700 metres to be contested by 13 native-bred maiden three-year-olds.

Then, take OASIS (returns in good nick) to upstage CIO MOTO, GRACEFUL NATIVE and the speedy CLASSICAL BULLET in the seventh race over the straight-five course. And the very knotty eighth race over 1500 metres for the Fontainbleu Trophy (open allowance) should come down to a battle royal involving the recent winners THE GUV, HAIL THE GENIUS and HEART OF GOLD, not to mention SHANGHAI PASS and down-in-class THE BOMBER. It should be very close among them, but the Spencer Chung-trained grey colt THE GUV (Paul Francis up) was such as impressive fast-time winner over 1400 metres on March 13 that he gets the vote with only 51.0kg.The closing straight-five race for $180,000 claimers should be won by POWER GLITZ, who not only loves the straight but is back to his happy hunting ground.