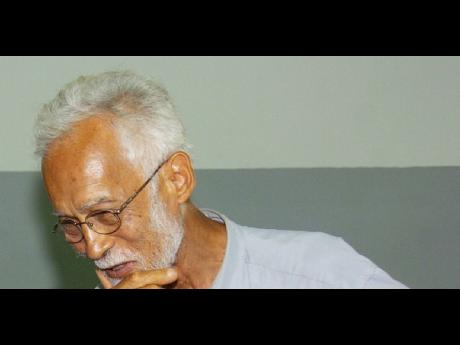 A double book launch by one person is an unusual enough occurrence. What made last Thursday evening's dual launch by Horace Levy at the Multi-Functional Room, University of the West Indies (UWI), Mona, even more striking was that he was titled 'Author and Editor'.

The authorship is of Killing Streets and Community Revival (Arawak Monograph Revival) and Levy also edited The African-Caribbean Worldview and the Making of Caribbean Society (University of the West Indies Press). In the introduction to the latter, Levy writes, "The person who inspired the chapters in this collection, delivered at a conference in January 2006 in his honour, is the well loved Barry Chevannes."

And Professor Chevannes spoke at the launch chaired by Clement Branche, who heads the Department of Sociology, Psychology and Social Work, Faculty of Social Sciences, in which Levy worked extensively. Chevannes noted that while Killing Streets is only just over 100 pages, it is packed with information supporting Levy's arguments. Central to those arguments, Chevannes said, are ideas of community and foregrounding of community and civil society as the place we need to look to, to understand the root of the violence which afflicts the country, as well as the solution.

Chevannes summed up the editor's four-stage role. First, he or she has to read the material submitted, then decide what to include and exclude. The third step is to suggest to writers how to edit down their papers and, finally, the editor has to justify the entire publication, writing a piece that brings it some consistency. He said that Levy executed the arduous task superbly, noting that among the themes The African-Caribbean Worldview and the Making of Caribbean Society covers are religion - Rastafari, Revival - music, identity, sex and language. "It's the kind of scholarship that Horace is so capable of and we have not seen from him," Chevannes said.

In his reply, Levy located the theme of 'civil society' as a link between the two publications. Don Robotham writes in The Third Crisis: Jamaica in the Neoliberal Era:

Then, Levy said, Killing Streets and Community Revival "asserts and calls for recognition of the central place in civil society of community, both geographical and national, on a theoretical level as well as in practical ways. It argues that only by attending carefully and systematically to this micro element can the macro or national scene actually achieve the transformation that everyone so avidly desires".

He was unequivocal in his views on garrison politics, saying "garrison violence and the perverse power-hunger of the clutch of politicians behind it are the enemy of community. There can be little doubt of the damage they have done to community. Community bonding, social capital based on mutual respect, has been deeply wounded by garrisons and by the intolerance they have spread beyond their borders. Dismantling garrisons must mean rebuilding communities, and this is what the Peace Management Initiative, as described in Killing Streets, has been trying to do - a civil-society effort though originating from and supported by the state".

However, there is another fallout of that peculiar Jamaican political process which Levy pointed out. He said: "there is one further aspect of this matter to which this book points an implicit finger and to which, in closing, I would like to call attention - the way that party politics has functioned in Jamaica. I am referring not just to its culpability for setting up and perpetuating the garrisons but to the other side of the party-power-through-violence coin - its failure of democracy, the failure to establish the democratic institutions that would put and keep politicians in their rightful place as servants of the people rather than their overlords." The audience applauded.

Earlier in his address, Levy had expressed his gratitude to those who contributed to and are connected with the two books. The launch was supported by Kingston Bookshop, which had copies of both books available for purchase.