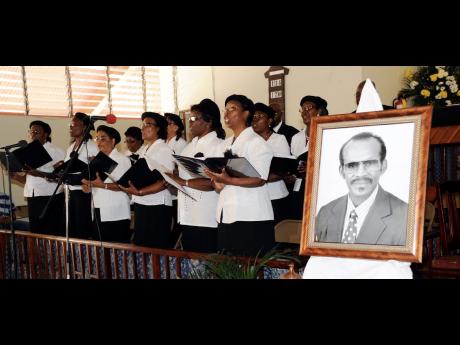 Choir members at the Boulevard Baptist Church, St Andrew, lead the singing at the thanksgiving service for the late Dudley Stokes on Saturday. - Norman Grindley/Chief Photographer

Dr Dudley Stokes became headmaster of Cornwall College (CC) the same year I entered, and he resigned from CC the same year I left. When I first met him, I was overawed by this tall and strapping man with the deep and commanding voice. And little did I know that one day I would be paying tribute to him in a newspaper for which he was once editor-in-chief.

To us, he was the symbol of authority; we feared and revered him at the same time. When he entered a chaotic classroom or the 'babelish' auditorium at lunchtime, he didn't have to speak a word to restore order. His mere presence always evoked some reaction or another, and his passing has caused us to reflect upon the contributions he had made to the maintenance of standards at the school "on the hill beside the sea".

Anthony 'Briggy' Laird, (star footballer): "I have nothing but love and respect for the Reverend Dr Stokes. Whenever I saw him coming, I would be checking myself, epaulettes, socks, etc. The fear I had for him was healthy; it definitely kept me in line. As a matter of fact, I don't think I would have graduated CC without that constant fear of facing him. I am very sure he is gone to the good place."

Rohan Manboard: "We all used to make sure we were on our best behaviour, proper dress code, etc. It has remained with a lot of us to this day. He was not a slave driver; he just made us remember as individuals we could pull ourselves up by our bootstraps and ... he reminded us of that a lot of times in the assembly hall."

The quintessential disciplinarian he was, but his style was calm and controlled. Many of us still have vivid recollections of the lashes that he dealt, and his way of using the rod was more painful than the caning itself. The man, in the most unemotional way, simply tanned your hide without uttering a word, except to say, "bend over".

Michael Prendergast: "I'll never forget the 'six stroke from Stokes'... learned a great lesson from them. He was one of a 'few good men'. Thank you, Dr Stokes, rest in peace.

Huntley Medley: "Dr Stokes distinguished himself as an extraordinary headmaster of Cornwall College ... For Cornwallians, Dr Stokes was as admired as an able administrator as he was feared as a disciplinarian. I count myself lucky to have been among the fortunate ones who escaped his trademark cane, even though I came perilously close to meeting it.

"I recall escaping the ignominious encounter with the unforgiving cane only after, as a diminutive 13-year-old, I amazingly, but successfully, negotiated with the towering, strapping, cane-flexing Dr Stokes to instead clean up a football field strewn with garbage. With limited grounds staff, he quickly saw the merit of my proposal."

Oral Porteous: "A disciplinarian, Dr Stokes believed in collective punishment. 'The good must suffer for the bad,' he would say. He knew the power of positive peer pressure to keep recalcitrant students in line. Dr Stokes was a great leader who knew when to use the cane, but also when to offer words of encourage-ment and advice. We are all the better for having known him."

And he was proud of his Cornwallians, despite his no-nonsense style of leadership. I recall when CC won the daCosta Cup in 1982 and 1983, after a drought of over 20 years, Dr Stokes boasted, "All my footballers are genuine Cornwallians," alluding to the practice of some schools 'buying' students from others, just to play football.

He was particularly proud of them because many of the footballers were sixth-formers who had passed several Caribbean Examination Council and General Certificate of Education subjects. It was also during his tenure that the sixth form returned to Cornwall in 1982.

Walter 'Stretch' Robinson: "He played a very important part in preserving the Cornwall College tradition in the '80s when it seemed like the powers that be were attempting to make Cornwall into a comprehensive high school."

Whether it was the voice, the dignified strut, the 'shades' or the cane that did it, Dr Stokes has left indelible marks in the psyches of those who were fortunate to be at Cornwall when he was there.

Leslie Mark Walker: (star athlete) "His sincere trust in my (then) strong athletic abilities moulded discipline and perseverance within my character. In memory remain our interactions, his stature and force throughout the 'College', and the depth of his commanding voice."

Mark Ambersley: "Dr Stokes was one of the key figures that moulded my direction in life today. He was not only dedicated in making sure we all achieve by whatever means necessary (caning included), but he also wanted us to become better men. For his influence and direction I am truly grateful, and he will be truly missed, not only as mentor, but also as a family friend. May he rest in peace."

Luke Williams: "He certainly will rest in peace because he went knowing that he had played his earthly role to the highest standard. He had given the world a multiplicity of educated men who serve in diverse fields for the betterment of not just Jamaicans, but numerous other peoples. Dr Stokes had given us the baton of excellence; it is up to us to keep the race going strong and to keep the baton moving. Thanks, sir. May your soul be blessed and justly rewarded."

Newton M. Grey: "I am happy I did use the opportunities I had, on the occasions I saw him, to say thanks for the positive impact he had on us. I must thank his family for sharing him with us. May his soul rest in peace."

The most wonderful thing though that I, Paul Williams, remember about Dr Stokes is that he gave me the most important second chance in my life. This was on the advice of Mrs Willy, my history teacher. It was at a time when I had no idea of what to do about a certain life-changing situation I was in, and he rescued me. I didn't disappoint him, and the rest is history. Thank you, Dr Stokes!