Roving with Lalah - The not so comfy street dance 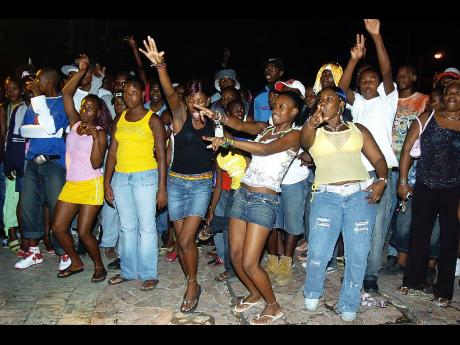 So even though there were far too many people getting closer to me than I appreciated, the party seemed to be in full swing. I supposed this was the place to be in Spanish Town, St Catherine last Friday night.

Me? Well, I would have preferred to be elsewhere to be quite honest, but while driving through the Old Harbour Road area of the town late that night, I was cajoled by a rotating circle of dancing women to hop out of the vehicle and join the party.

It was a street dance of sorts being held on the side of the road outside a small rum bar. Huge speakers were placed near the steps to the bar and a turntable with a shady looking fellow standing behind it was on the opposite side of the building. There were maybe 100 people at the dance, most standing around looking tired while a few with bottles in hand were rocking to the music. Music, though, might be a stretch, as far as describing the output of the giant speakers is concerned, but the crowd seemed to like it. I was not about to complain, as even though a keen sense of adventure and a hint of curiosity led me to follow the dancing women into the crowd, now that I was there, I wondered what in the name of all things precious was I doing there.

I stood out like a sixth toe. Most of the men in the crowd seemed to have been upset about something and I had no intention of getting on anyone's nerves.

The only smile to be seen was on the face of a creepy fellow in a pink shirt and matching scarf who seemed way too happy to see me. I'm sure he was wearing eyeliner.

Needless to say, the second I spotted him I moved to the opposite side of the bar.

The 'music' was thumping heavily; it felt like it was vibrating inside my chest. The man behind the turntable grabbed a microphone.

"All ah di gyal dem weh know dem have wah fi hold dem man walk out now!" he yelled more loudly than was necessary. It was an ironic group of women who answered the call.

Some were still wearing curlers in their hair, while others, who perhaps spent some amount of time getting ready, may as well not have. They however, danced quite happily, moving to the detailed instructions of the man with the microphone.

A tall man wearing a white cap, shirt, pants and shoes walked up beside me. He must have been more than six and a half feet tall and was shaking a box of cigarettes in his hand. Soon he struck a match and started puffing on a cigarette. Immediately, I was covered in smoke. Coughing, I used my hand to wave the smoke away but it did little to help.

I looked up at the man, hoping he would see the distress on my face and perhaps step aside or put the cigarette out. When our eyes met though, the man gave a cool nod then looked away quite casually. He blew another puff of smoke that went directly in my direction and that is when I decided to walk away.

On the other side of the building I saw a woman taking a swig from a green beer bottle. She looked at me and smiled, exposing more gold in her mouth than she was wearing around her neck.

She was looking a little woozy but walked over to me nonetheless. "Hi, hello," she said. I caught an unwelcomed whiff of the liquor on her breath.

"Buy mi a dri..." she started to say before breaking into a cough. "Eh ehm ehm!" I stepped back with a wince. "Sarry. Buy mi a drink nuh darling," she said. Her voice was deeper than mine. Thinking it was the best way to get rid of her, I signalled to the barmaid to take care of her and sent her shakily on her way.

To my distress, the response from the men in the crowd was loud and immediate. I instantly, of course, decided it was time to leave. I made my way quickly to my car and sped off. It was when I got about a mile away that I realised I had not paid for the woman's beer. Now, that was not a crowd I wanted to anger, but there was no way I was going back there.

Note: To the barmaid: Please don't send for me, I promise I'll find a way to make amends.